Home > Vintage Gun Journal > A Dougall by Another Name

In my September 2020 article in The Vintage Gun Journal, No Charge Can Hurt the Gun, I presented the story of Scottish gunmaker J. D. Dougall. Dougall was a strong proponent of the pinfire.

As a Dougall collector, I wanted to acquire a Dougall pinfire. I also like to have my Dougall guns in appropriate, period cases. One can imagine my interest in a Dougall Lockfast pinfire in an unusual, original, labelled case, with some period tools, shot canisters, and 67 pinfire cartridges. Only one problem -- neither the label nor the gun was signed J. D. Dougall. The gun and label were “W. Golden, Cross Street, Huddersfield”.

Prior to researching this article, I knew nothing about William Golden. If fact, I had never heard of him. I assumed he was just another nameless provincial maker. My research has proved me wrong. I hope that this article gives him some of the due that he should receive. 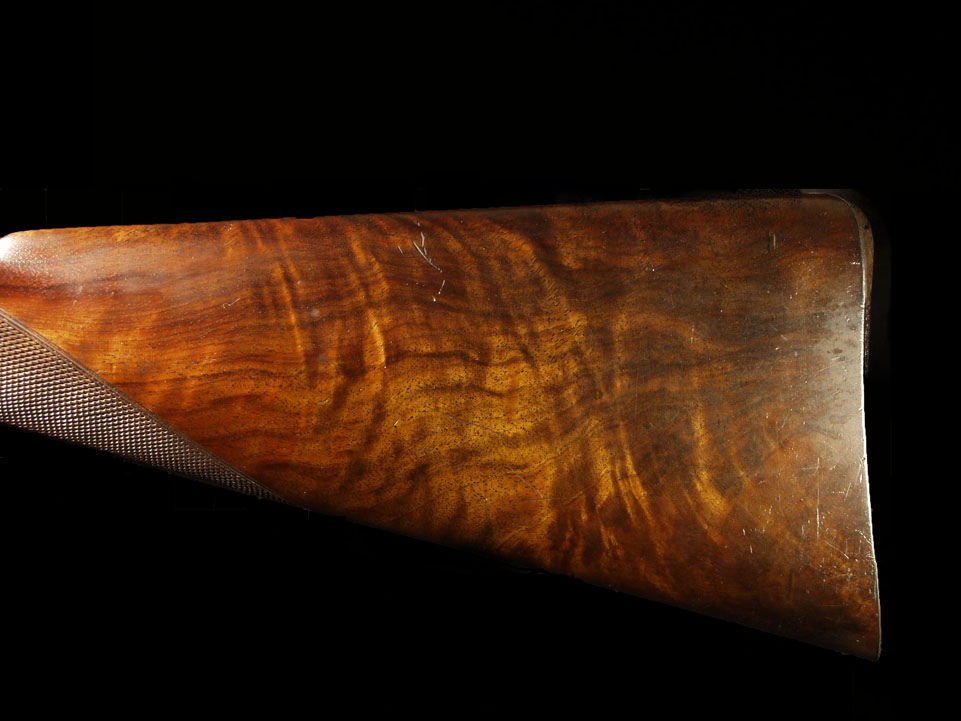 I first consulted my library of books on English guns to discover what current information was available on William Golden. The most information that I could find was in Geoffrey Boothroyd’s book, Shooting, and Gunsmiths: The Vintage Years (Safari Press, 1993). This book is a reprint; the original is copyright 1986. My own research has proven that most of the background information on the Golden family of gunmakers in this work is in error. Boothroyd did not have the advantage of the Internet to search original records.

This article is focuses on William Golden, whose style appears on my gun. William was born in 1801 (1). William’s advertising and case label claim that his business was established in 1822 at Huddersfield, West Yorkshire. His son, Charles, was born in 1826 (1). At some point, prior to 1853, Charles joined his farther in partnership. This partnership was dissolved on 31 December 1852 (2). Gunsmiths generally apprenticed until the age of 21. This would indicate that the partnership lasted only five years or less. I have been unable to find documentation to confirm the date of establishing the partnership, however.

William’s advertising and case label claim that his business was established in 1822...

Charles moves to Bradford and establishes his own gunmaking business. He advertises same on 26 May 1853 (3). (Charles loses no time getting away from dad). He remains in business in Bradford at least until 1883. He dies in 1898 (4). One last note on Charles. Another Charles Golden, gunmaker, comes to Bradford from London in 1898 and sets up a business. He is, apparently, no direct relationship to the original Golden family. He goes bankrupt in 1901 (5).

Now back to William. Gun making is not William’s primary business. It is that of ironmonger. He starts a business of supplying farming equipment in 1833 (1). This apparently becomes a large and successful business as it occupies 6,8,10 and 12, Cross Church St. in Huddersfield. He has a gun shop at 7 Cross Church Street, which sells a wide variety of guns and sporting equipment (6). However, a majority of his advertising in the last quarter of the 19th century, focuses on the sale of farming equipment.

By Appointment to His Majesty the King of Prussia

How does a gunsmith in rural West Yorkshire become a supplier to the King of Prussia? Boothroyd asks this question in his book referenced above. The answer to this question is what makes William Golden an important contributor to the development of the bolt-action rifle and gun.

A friend of Williams, a Mr. John Hanson of Folly Lead Works, came to William with a revolutionary gun design and asked him to build a rook rifle on his design. William did so. A patent, No. 2129 of 1841, was granted to “W. Golden and J. Hanson (Huddersfield) for breechloading firearms and self-contained ammunition”. A very detailed description of how this firearm operated is given in the Cardiff and Merthyr Guardian, Glamorgan, Monmouth and Brecon Gazette – Friday 13 July 1866 (available, online, at the British Newspaper Archives website). The article describes a bolt-action needlefire rifle. The King of Prussia ordered two of these rifles from Golden (thus William Golden now claims “Appointment to the King of Prussia”). The Prussians copied the Golden/Hanson design with “trifling modifications.” Their gun became the standard Prussian military needlefire rifle, and made the Prussian army one of the most powerful armies in the middle of the 19th century.

...the “makers” name on the side-plate and rib of the gun is not necessarily the maker of the gun.

Any student of English guns knows that the “makers” name on the side-plate and rib of the gun is not necessarily the maker of the gun. Boothroyd, again, asks whether W. Golden could/was making the guns that he sold. Almost assuredly Golden was capable of making the guns himself. He advertises that he is selling the Golden/Hanson patent guns in 1842 (7). I believe that it is unlikely that he was having another gunmaker build guns to his own patent. (Does anyone know of one of these guns surviving?)

The William Golden pinfire, serial number 1897, is built on J. D. Dougall’s Lockfast action, patent 1128 of 1860. (Figure 1). For those unfamiliar with the Lockfast action, a quick tutorial. Dougall had studied the weaknesses in the Lefaucheux action. He designed a slide-and-drop action in which a side-lever slides the barrels forward on a concentric cam and allows them to drop, rotating on the hinge pin to correct these weaknesses.

The locking mechanism consists of a boss (a steel disk) attached to the standing breech, aligned with each barrel; and a barrel under-lug. The breech end of the barrels slide over the bosses and the barrel lug engages the action. The action closes by pulling the lever back, which forces the barrels over the two round bosses, pushing the cartridges into the chamber, and sealing it. The action completely encases the cartridge in steel, eliminating the weakness at the interface between the barrels and the standing breech. It is an extremely strong action design. (Figure 2) 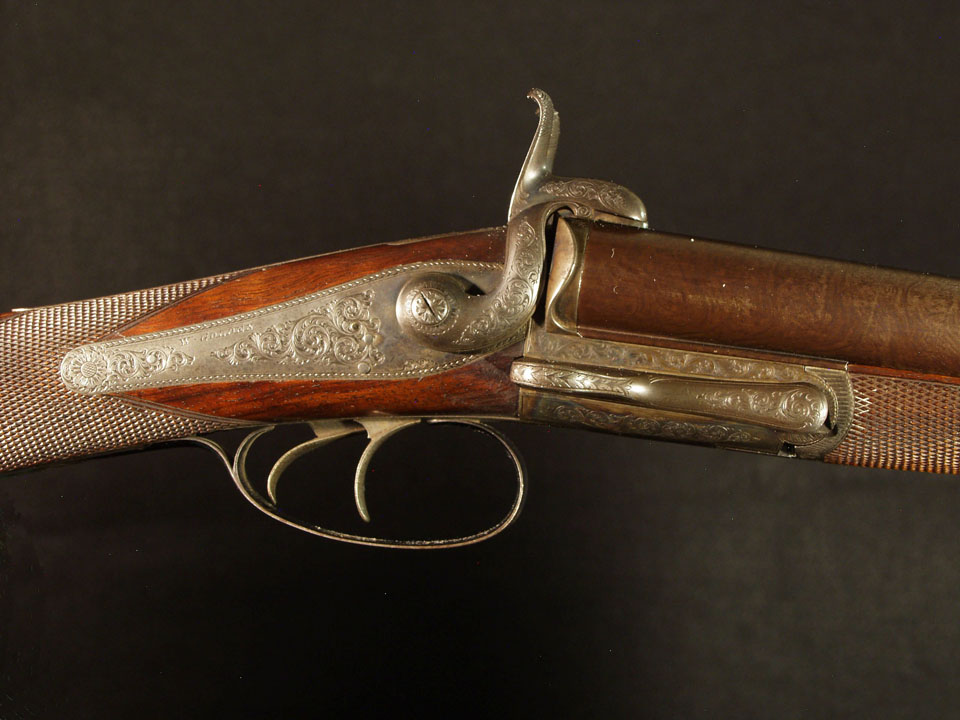 The condition of gun # 1897 is exceptional (Figure 3). It actually appears to have little, if any, use. The faces of the bosses on standing breech are unmarked (see Figure 2). The could be explained, however, by the Dougall Lockfast forward-and-drop action which would have moved the barrels away from the bosses prior to dropping the barrels, thus avoiding scoring the standing breech. Case coloring is still vibrant on all of the case-hardened surfaces. The gun is so tight that it is difficult to remove the barrels. 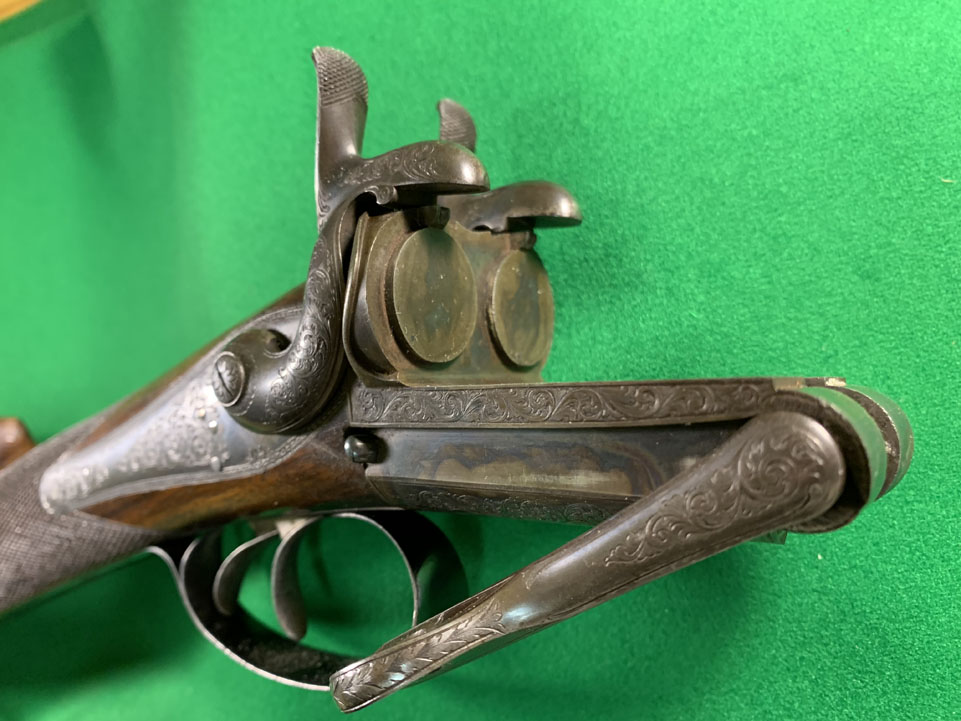 The barrels appear have the original browned surfaces and are of English Crolle Damascus. The stock is well-figured English walnut (Figure 4). The checkering is crisp, but it is the one thing that I have my doubts about being original. The grip checkering is not flat-top. It is also not exactly diamond either. The checkering on the butt is flat-top. This inconsistency concerns me. I would appreciate any reader who has ever seen this type of checkering used on an early gun to please let me know. 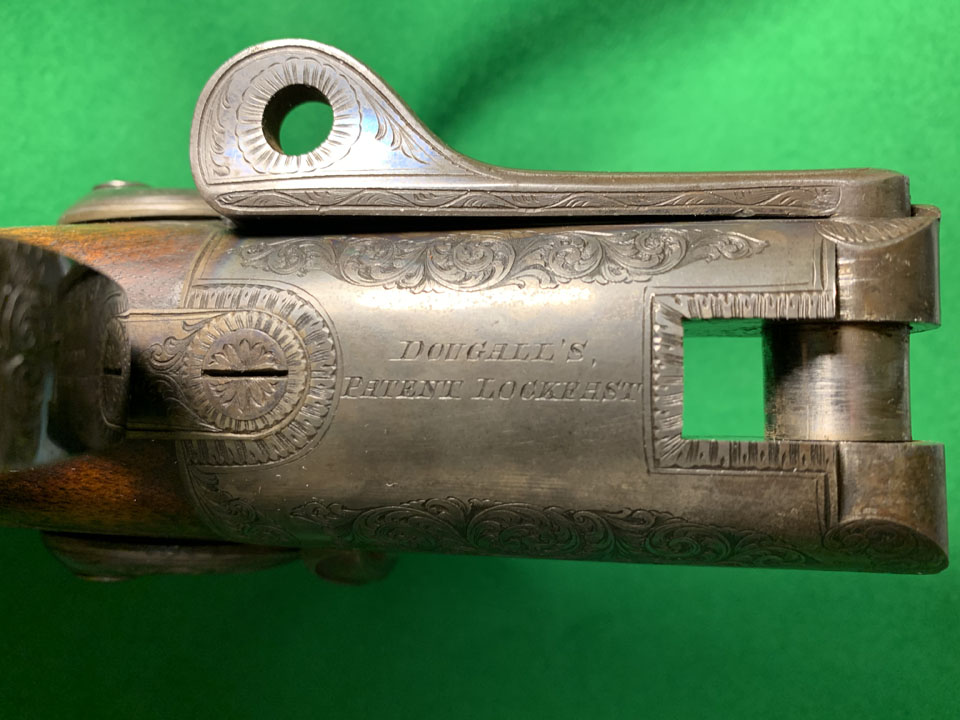 The W. Golden Case. The W. Golden case is as interesting to me as is the gun. The first thing to notice is that one cannot see the gun when the case is opened. The cartridges are contained in a green-painted tin container with a hinged top. This container is form-fitted into the back of the case, and functions as the top to the various case compartments.

The case containes 44 loaded and 23 unloaded pinfire cases. The 23 unloaded cases are new. The loaded cases were hand-loaded. The two matching Dixson and Sons powder and shot measures appear to be virtually unused. The two canisters of shot are particularly interesting. They appear to be #6 and #8 shot, consistent with the markings on the hand-loaded ammunition. These are “Best Red Fire” and “Best Green Fire” shot made by J. W. and Company. There was also a pinfire cartridge extractor made by E.D. Depose, as well as some miscellaneous cleaning rod attachments (Figure 6). 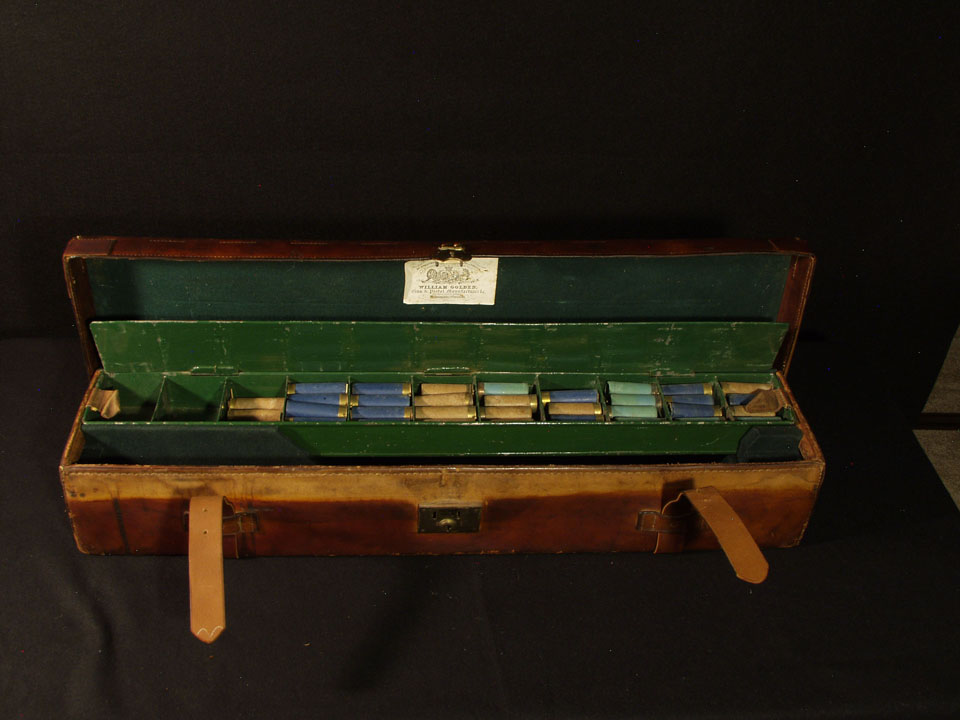 Who Actually Made the W. Golden Pinfire?

We shall probably never know for sure who made the #1897, but let’s look at some of the facts. The action was almost definitely ordered from Dougall. It is unlikely that that Golden would have purchased it from another source, since it would have been readily available from Dougall. A clue to confirming that the gun was built by Dougall is the serial number of 1897 on the trigger-guard tang. If the serial number is that of J. D. Dougall, the gun dates between 1864 and 1865 (8). This is consistent with the London proofs on # 1897, which date between 1855 and 1868.

I hope that this article has shed some light on a relatively unknown, but important provincial gunmaker. I also hope that the reader will find interest in both the W. Golden/J. D. Dougall pinfire and the original W. Golden case and accoutrements. Anyone who has further information on W. Golden and the answers to the two questions that I asked in the article, please contact me (Kirk Lubbes) at captrkirk@yahoo.com. 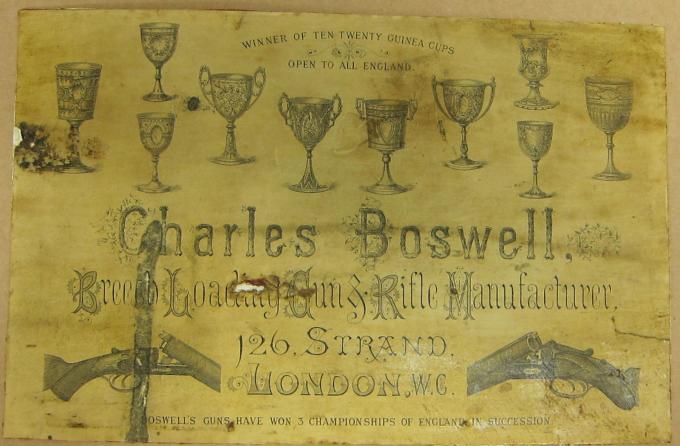