This double eight-bore may have ducks engraved on it but, according to the maker, the principal quarry of intent was crocodiles!

Ordered in January 1939, when war with Germany was not yet a certainty, Mr Langdon Williams must have had a very different future planned for himself and his William Ford 8-bore than the one that likely materialised once hostilities commenced and life in the Raj was turned on its head with the Japanese invasion of South East Asia and the rapid fall of Singapore. 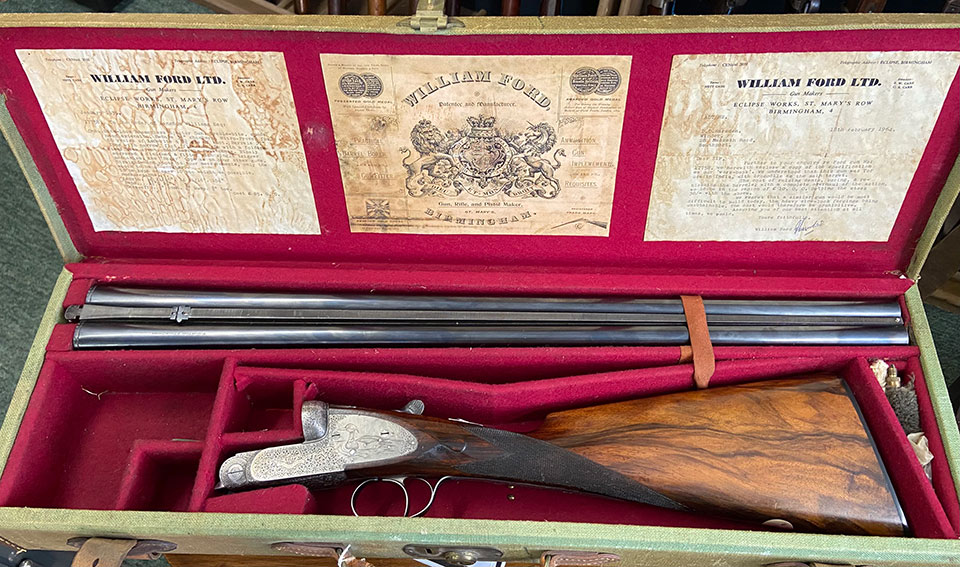 Though an eight-bore and engraved, as per the order, 'nicely' with scrolls and scenes of ducks paddling around in a pond, it is unlike most wildfowling guns of this type. It has short, 27" barrels and the narrow rib is interrupted by a folding leaf sight. 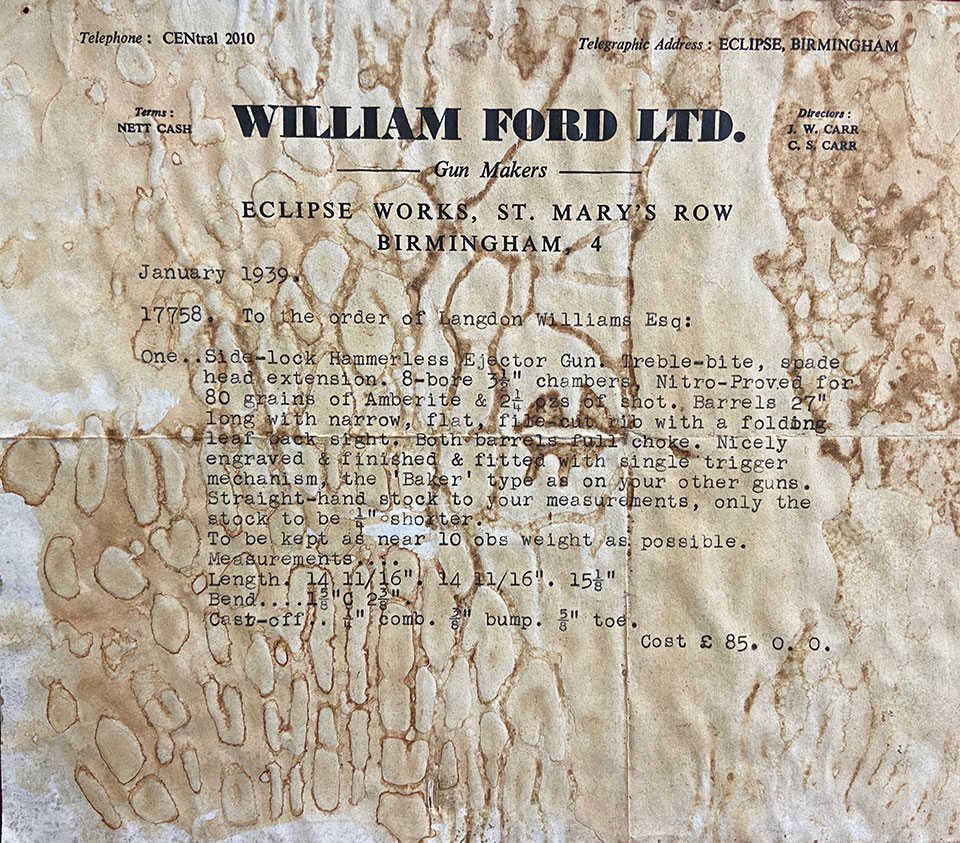 The order, which is pasted into the lid of the gun case, outlines all the cast and length dimensions as well as the stipulation for Baker patent single trigger and a plan to keep the weight to 10lbs if possible. Mr Langdon Williams had clearly put a great deal of thought into this commission and knew what he wanted. He asked for the stock to be made 1/4" shorter than those he usually used. 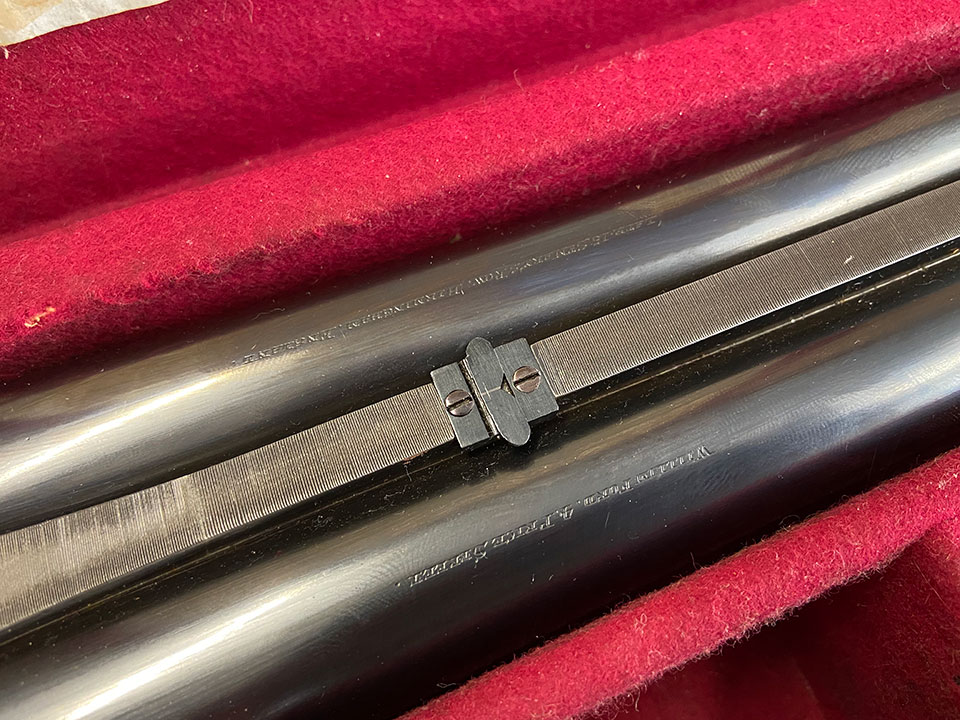 The price of the gun in 1939 was £85. For perspective, the price of a Purdey best 12-bore at the time was £130 guineas. Whilst the aim was to get the gun built to 10lbs, it actually weighs 10lbs 13oz. The steel barrels are nitro proofed, with 3 1/2" chambers and they are full choke in both barrels. 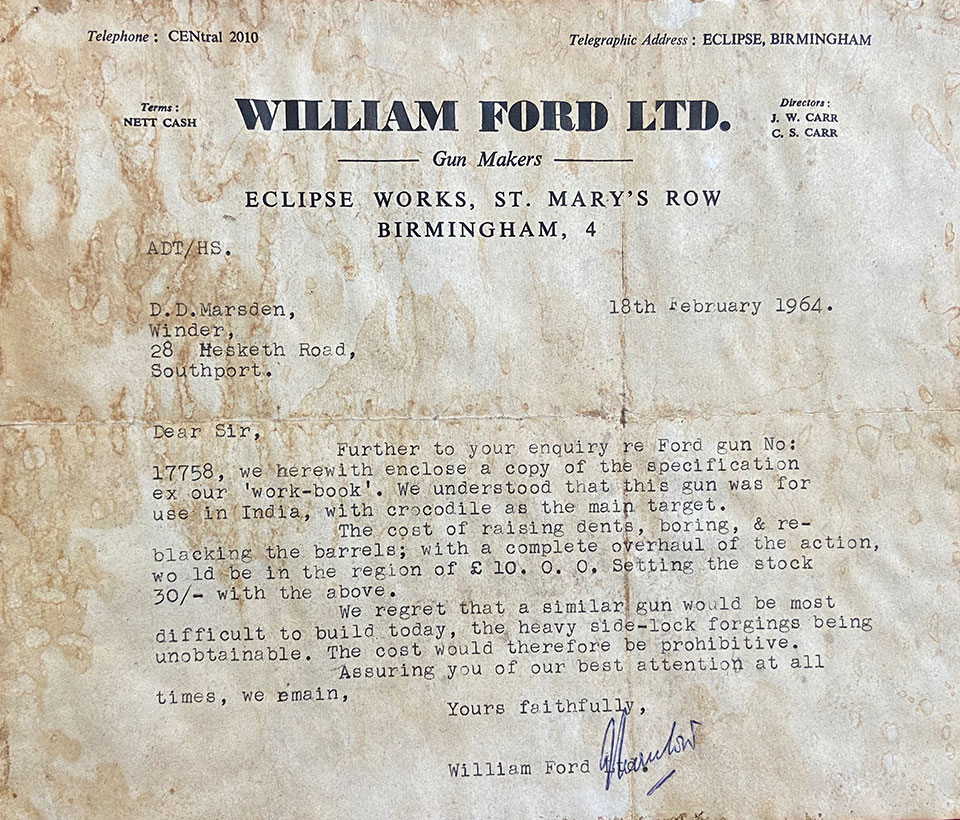 The concept seems to be half-way between a shotgun and a bore rifle, the owner wanting to fire rapid shots from the shoulder but preferring shot to ball. A letter from the maker in 1964 (to a Mr Marsden, who was presumaby then the owner) explains 'we understood this gun was for use in India, with crocodile as the main target'. 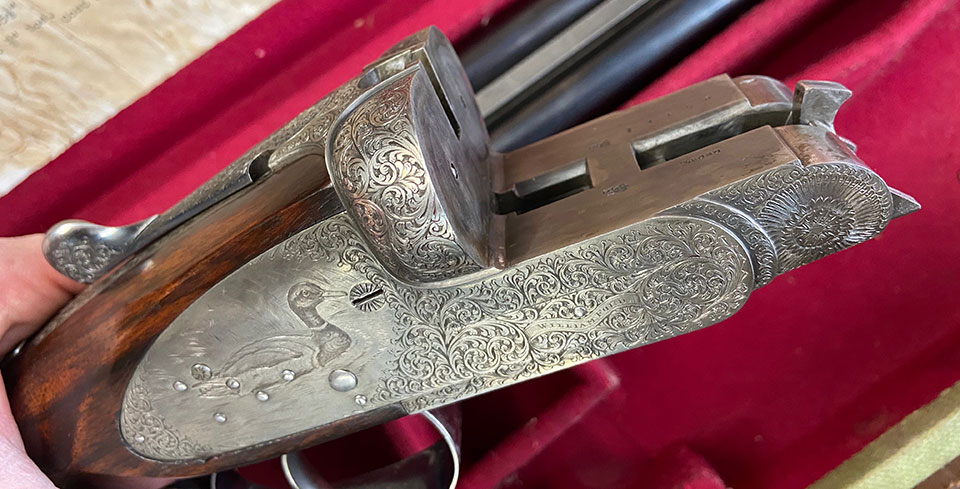 No. 17758 looks like it was rescued from India in the 1960s and according to the letter, needed some restoration work carried out. This has clearly been done and the gun now looks very presentable 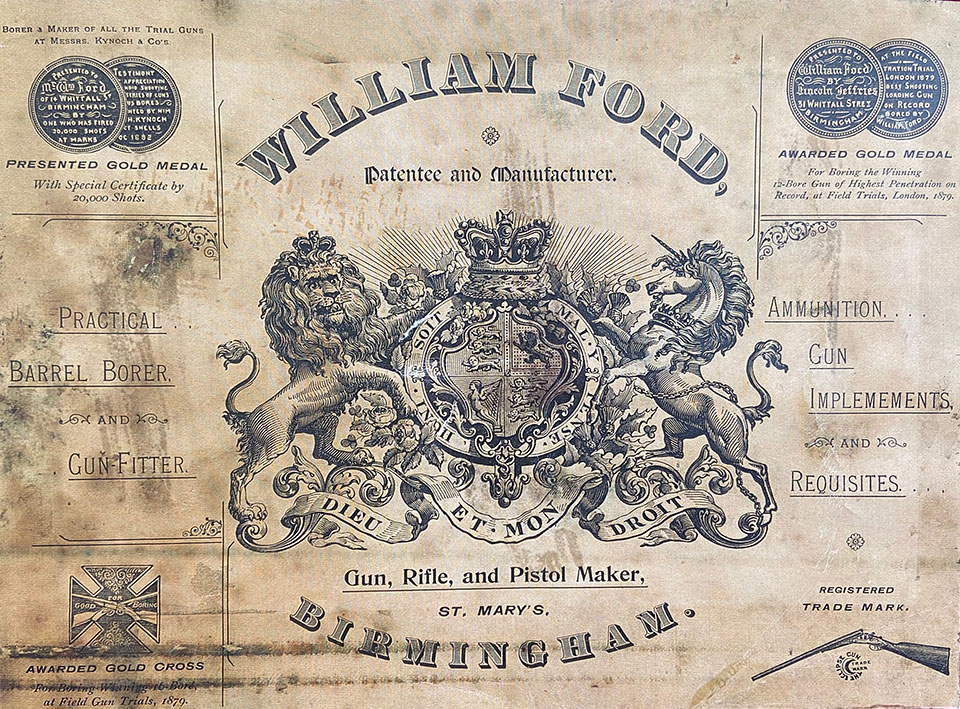 Ford's trade label from the period is also pasted into the case lid and boasts of many of his accolades and awards. It has all the hallmarks of a confident and succssful business of some maturity, rather a contrast with the forlorn admission in 1964 that the company could no longer make a gun of this type, such was the dire state of the gun trade by that time (just twenty three years later). 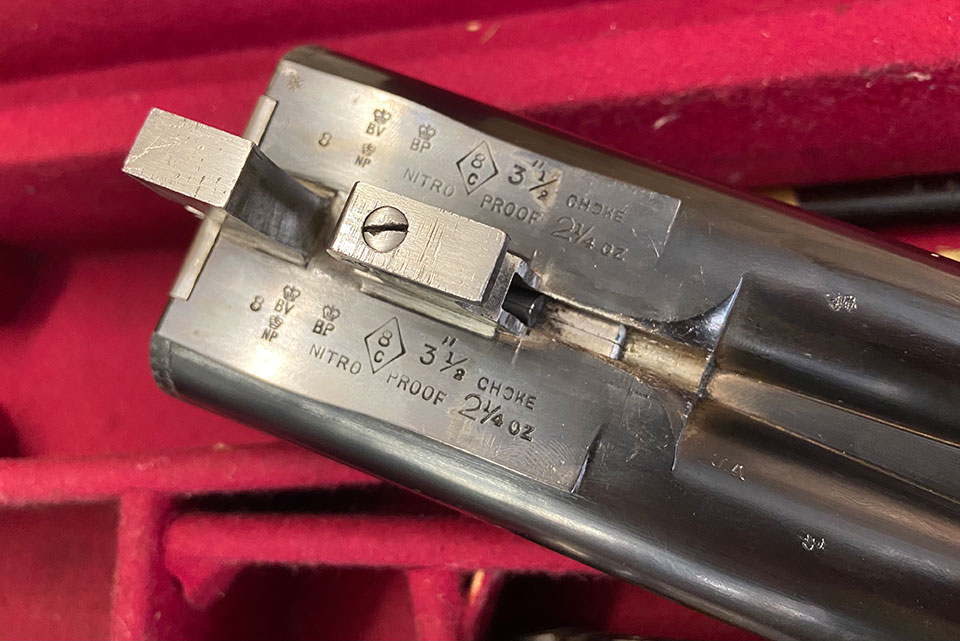 The proof marks show the intended load was 2 1/4 oz of shot, equivalent to two standard twelve-bore cartridges of the day. Presumably, for crocodile hunting, the shot of choice would have been fairly large. Whatever it was loaded with, it would have been formidable. 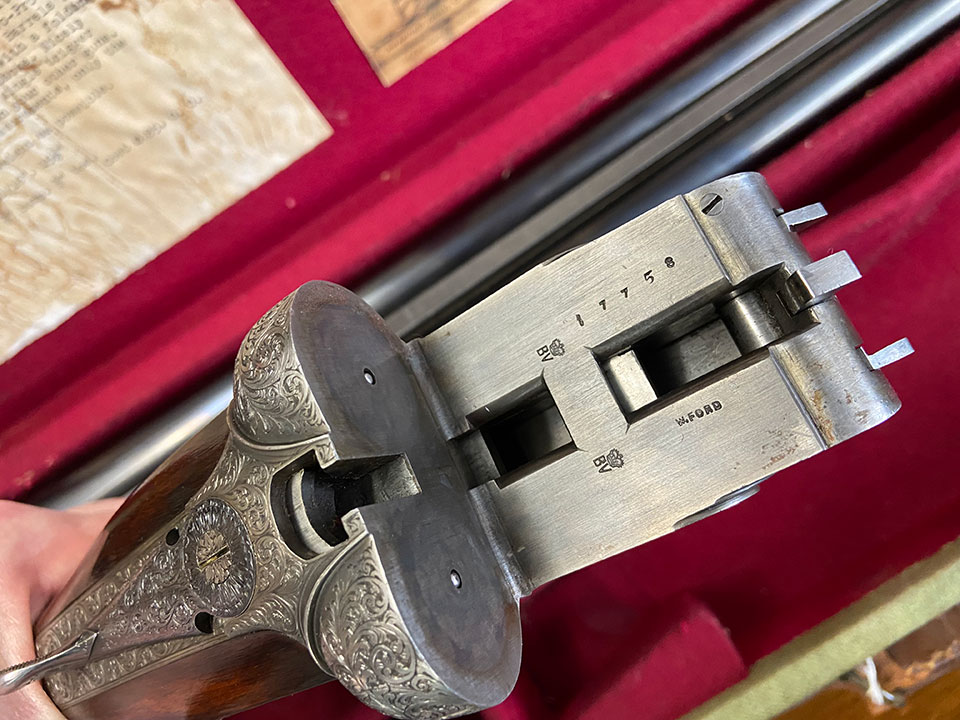 The gun remains in very good overall condition, its massive action well proportioned and elegant, the action has been brushed to clean it and the case hardening colours have long since departed but the engraving remains sharp. 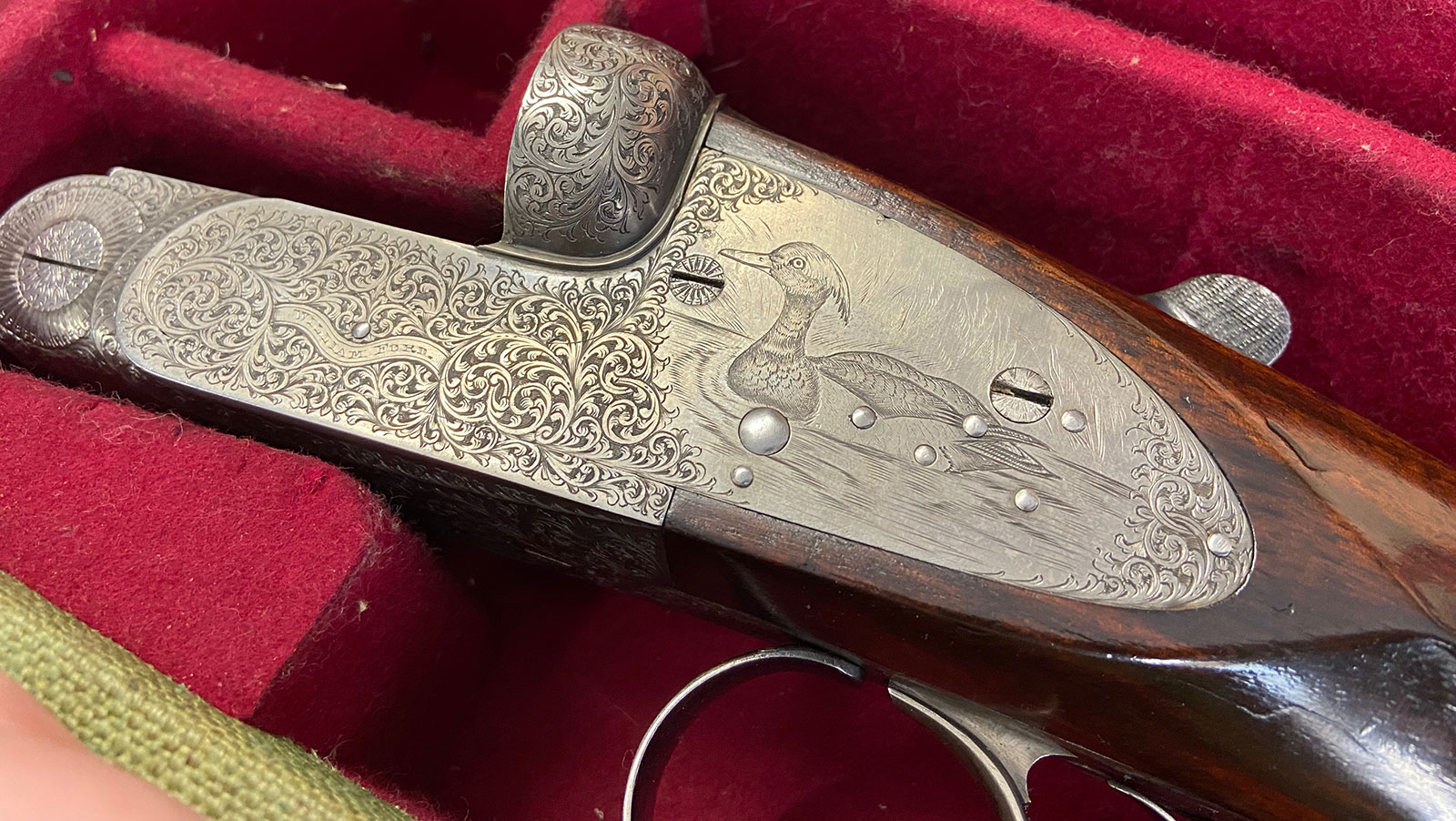 The value of something like this in today's market? Around twenty-three thousand pounds. The cost of building one? As William Ford told Mr Marsden in 1964: 'prohibitive'. 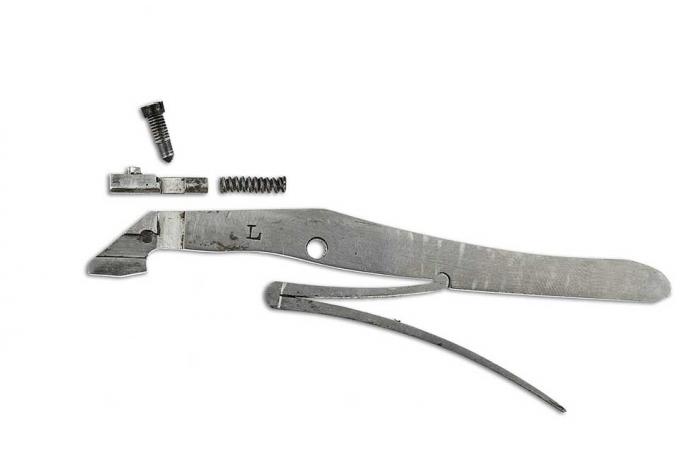 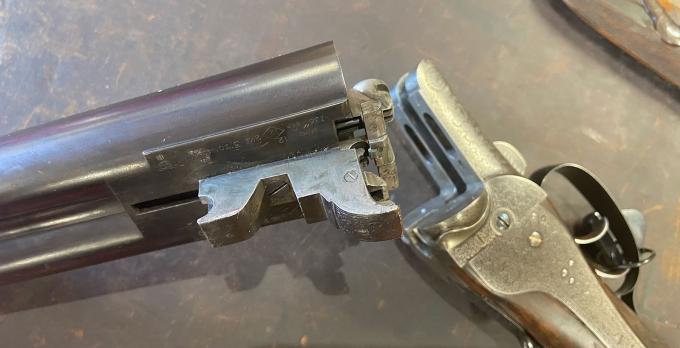