This interesting and rather obscure little document provides a fascinating insight into the charges Gun Trade workers made for their work in a very detailed breakdown of the trade jobs and costs involved in the construction of sporting guns.

The first page informs us that it is a publication of the ‘Worker’s Union’, which had a registered office at ‘Eversleigh’, 11. Lyndhurst Gardens, Hampstead, London NW3’.

The Workers Union was formed in 1898 to push for improved wages for agricultural labourers and grew over the next twenty years to become quite an important organisation before it eventually merged with the Transport & General Workers’ Union in 1929.

The President is Councillor John Beard. Beard held this office (and that of councillor) from 1913 until he left Birmingham in 1920, for London. 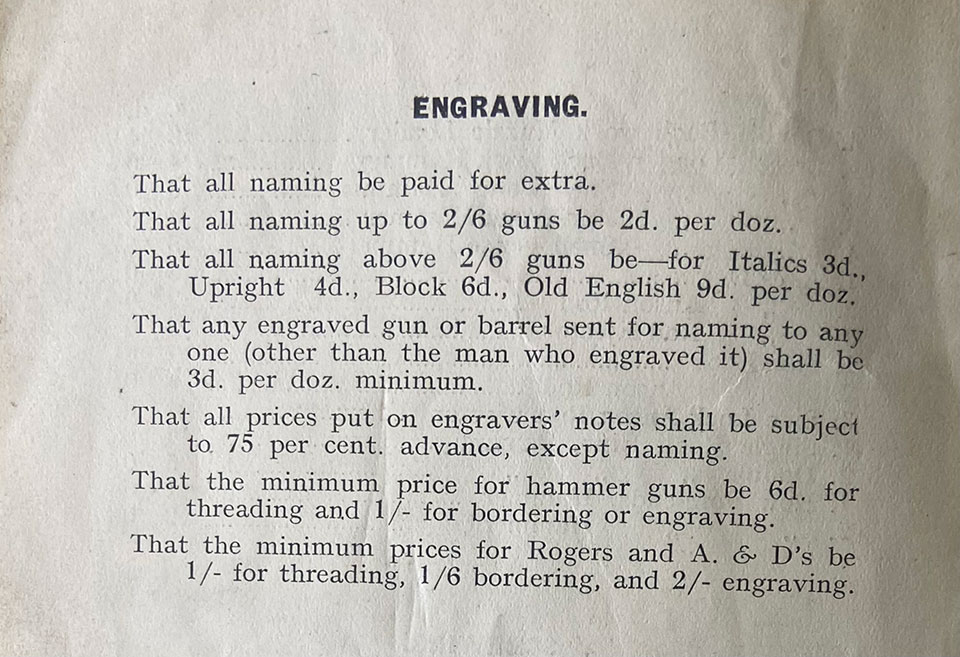 We can, then, fairly date this publication as coming from the 1913-1920 period. It is relevant to ‘Birmingham & District Sporting Gun Trades’ and specifies the ‘Minimum Piecework Price List For all Sections of the Trade.’

Piece work was a system by which workers were paid an agreed price for one completed item (or piece’) to a standard accepted by quality controllers. How long it took to make one was a matter of skill and experience. Faster, more skilled men made more money because they could make more pieces in an hour than those lesser skilled.

The booklet contains seven pages of prices for every kind of job in the gun trade. Prices are in shillings and pence.(s.d.). One pound was twenty shillings and one shilling was twelve pence

Some interesting benchmark figures include the following: Stocking an Anson & Deeley boxlock cost six shillings. The rate for stocking the forend of a hammer gun was one shilling and sixpence.

Polishers prepared the gun for the engraver and the cost of polishing a ‘Shell Fence Boxlock’, which would have been a Greener, was three shillings.

Hammerless guns were much more expensive to make

Engraving the names on guns was priced per dozen, for example, three pence per dozen if engraved guns were sent to another man for naming to be engraved on actions or locks and barrels.

‘Furniture Making' refers to the provision of top-levers, trigger guards and such like. A ‘Roger sidelock’, which was a commonly used trade action at the time, made in Birmingham and supplied to retailers all over the country, cost seven shillings to make furniture for, while a plain Anson & Deeley gun cost six shillings.

Barrel filing for a standard set of barrels with under-lumps, cost four shillings and sixpence. Fitting a loop cost one shilling and letting in a top lump cost the same.

The most expensive part of the process was action filing. The difference in costs is notable. A bar action hammer gun cost twenty shillings but that could rise to thirty two shillings if it required a Scott patent square top bolt.

Specific tasks were clearly done in batches and priced per job, like fitting split extractors to a pair of barrels at nine shillings and sixpence and making and fitting Southgate ejector work in the forend, which cost a hefty fifty shillings. Fitting a Scott spindle and top lever was eleven shillings.

The price for finishing a gun was ten shillings for an Anson & Deeley and the same for a Roger’s action side-lock.

What does that tell us about how much money workers were making back in the second decade of the nineteenth century? A male bookshop assistant in 1918 made twelve shillings and sixpence per week, while a female seamstress had to work a 10 1/2 hour day for sixteen shillings.

A book-keeper working in a manufacturing or retail business might earn sixty-nine shillings per week in 1920. So, a stocker in Birmingham completing three boxlocks per week and making eighteen shillings was working long hours and was certainly not a wealthy man. 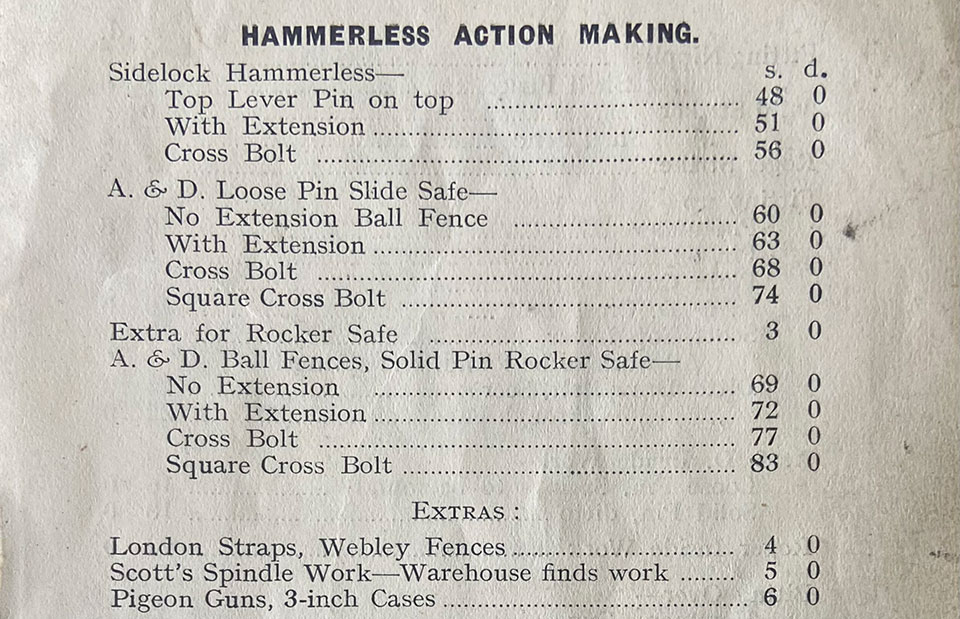 These prices charged to the trade show the rate at which work was turned out. Doug Tate in Birmingham Gunmakers reports the average wage of a Highly Skilled stocker in 1913 was fifty-five shillings. At a rate of six shillings per boxlock, he would have to complete nine guns per week if that were true.

It can be hard to put into perspective the true equivalence of money when making comparisons between now and long ago. A standard inflation calculator suggests a pound in 1914 would be £123 today. That being the case, someone trying to live today on less than £300 per week would have a very poor standard of living. By 1920 the value of one pound had fallen to the equivalent of £45 today! 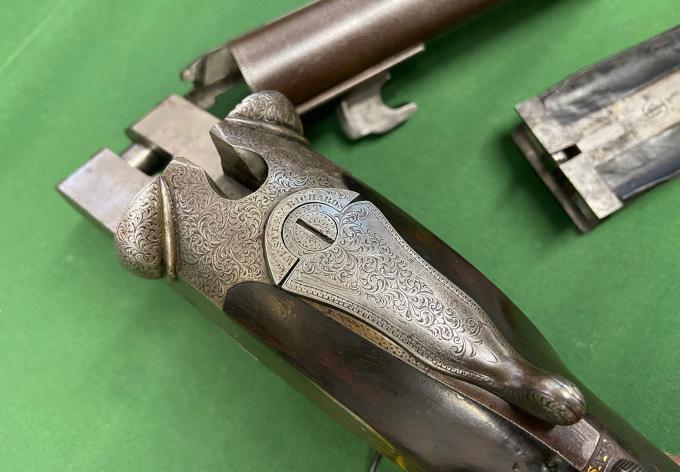