‘One rifle for the World’ goes the saying. The iconic .375 Holland & Holland belted magnum is universally lauded as the most versatile round available: perfect for medium game, adequate for dangerous game, dependable, accurate and deadly. Such is the reputation of the cartridge that its lesser-known cousin is often overlooked.

I just managed to get my hands on ‘the other .375’, in the shape of a beautiful side-lock double rifle by Cogswell & Harrison and took the opportunity to put it through its paces in Tanzania this summer.

.
The H&H Flanged Magnum is a variation on the belted magnum round and is suited to double rifles, where the flange aids extraction. The loading of the flanged version produces lower pressures than the belted cartridge and this reputation of it being rather less powerful has hampered its acceptance in many shooting circles. A typical bullet weight of 300 grains moves at 2,500 fps, which is about 30 fps slower than the rimless version. Does this matter?

As a rifle shooter who enjoys older kit and is motivated more by dead animals than clover leaf holes in paper targets, I tend to ignore ballistic tables and the theoretical ‘edges’ one round holds over another. If I can find an interesting rifle in a calibre I can make work, I’ll then try to hunt with it in manner suited to the rifle and ammo combination.

I glaze-over when another tech-nerd tells me that capable rounds like the 9.3x74R or the .375 flanged are not as good as the .375 belted magnum. The differences are so tiny as to be irrelevant in real terms, where you have a good sized animal that needs to be hit in the boiler room with a decent bullet weight in order to kill it. Will it die more because of an extra 30 fps of bullet speed? Doubtful.

Well, talk is cheap so I thought the best test was to chase some big beasties with the Coggie in hand. Tanzania provided the opportunity. We were hunting a ‘full bag’ safari along the Rungwa river in eight million acres of game reserve with old-time PH Danny McCallum, one of the last of the original white hunters operating in East Africa. My friend Michael owns the rifle and had taken it to Zimbabwe on a previous safari, where he had accounted for lion, elephant and buffalo with it. On this occasion he was hunting with a .577 Westley Richards so the .375 was our back-up and medium game rifle.

The first opportunity to see the rifle in action was an old male lion, we were down-wind and out of sight, behind a makeshift grass blind, as the old boy molested some buffalo remains and drank at a stream perhaps twenty feet from us, as dawn broke. With improving light,we verified his age and suitability and Michael took the shot, as he stood broadside at forty yards. A perfect behind-the-shoulder placement saw the lion bolt towards the long grass but he collapsed before he made it and lay dead on the edge of the cover. The soft-nose had done a perfect job, no need for a second shot and no need for any drama.

The next victim was a good zebra stallion. He faced Michael at about eighty yards. The shot was a bit to the left of perfect and he ran. Following the blood trail, we found him dead a quarter of a mile away, having jumped a creek and bled-out.

My opportunity to try the rifle came when we were seeking crocodile and hippo along the over-grown river bank. The water was boiling with hippo and the crocs were coming out to sunbathe at mid-day. Crawling along the hippo runs, staying out of sound and sight, we found a big rock with a big croc. Crawling into a position to shoot, I attached the Swarovski quick-detach ‘scope and drew a bead on the ridges above the big lizard’s eyes. The brain is a matchbox and you have to hit it or our friend is going to be in the water in a flash and you’ll have to start a rather hairy game of hide and seek.

I had managed to crawl to around forty yards and my position was steady. At the first shot, the croc threw his head up, thrashed his head and tail and opened his huge mouth in a silent roar. The second shot took him in the throat and, leaping to my feet, I chambered a round in the right and fired again, hitting I’m just behind the shoulder. As I ejected the round and re-loaded, the call came; “It’s over’. Sure enough, the monster was still, just where I had first seen him.

The last two shots were unnecessary. The first, a soft-nose, 300-grain round had detonated his brain and removed three square inches of his head. The taxidermist would have a job on his hands but we were not going to have to poke a twelve-and-a-half foot croc out from under some tree roots! Instead, I lit a cigar and the trackers went in to rope the beast and drag it to shore.

Reflecting on the .375, I noticed it had no felt recoil. The rifle shot flat and true at the ranges at which dangerous game hunting should be carried out. Nicely balanced and light, the Coggie has quality hand-detachable locks and some very classy gold inlay to the muzzles, breech ends and lettering, as befitting the 1912 order, which came from a Russian aristocrat.

I did learn a lesson in following-up. The first shot on a cape buffalo from the .577 went astray and with the ‘scope on, I was unable to get onto the running beast and put in a follow-up shot before he disappeared into the bush. Never follow-up with ‘scoped rifle! That led to an interesting afternoon in the long grass, but that is a story for another day. 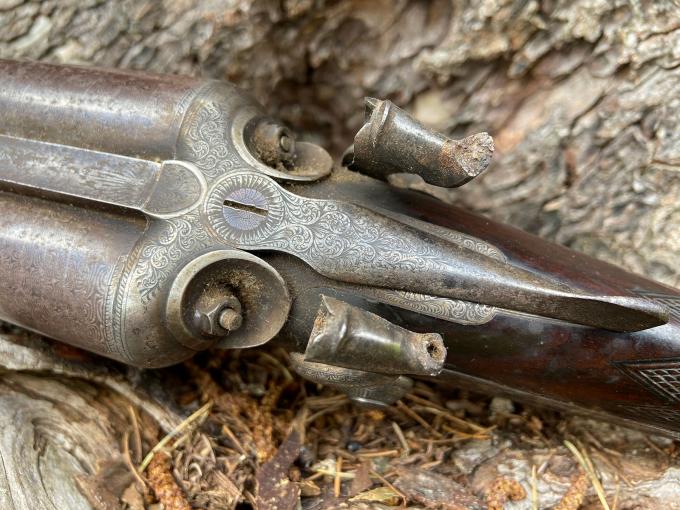