Frederick Beesley’s career was remarkable for its inventiveness and success, with David Baker noting twenty-five patents to his name. However, in recent years there have been various comments that he was dismissed from Purdey for drunkenness. This was referred to in an article written by William Juch for Fieldsports magazine in 2017, citing comments printed in the Shooting Sportsmen in 2009, made by members of Purdey. Having being challenged as to the origins of the story by Mark Crudgington, Juch found that Frederick had an older brother, Edward Albert Beesley.

Edward was three years older than Frederick, and had been apprenticed to Harris Holland. Sadly, his life and career are difficult to trace, and it has not been possible to find certain sources referred to in Juch’s article. It appears that he was married in the St. James’ area of London between April and June 1863, and this is supported by his son (also Edward Albert) being twenty-three years old when he married Laura Kingwell on 27 June 1886. Sadly, Edward’s entry in the 1871 Census could not be located, and so the name of his wife and any other children cannot be confirmed.

A letter in the Purdey archive may provide some of the answers.

Although Edward explains this apparent duality in Frederick’s character, it does not answer where this piece of Purdey lore stems from? A letter in the Purdey archive may provide some of the answers, as it contains a fairly damning account of the behaviour of ‘Beesley’ over a two-year period:

Dear Sir,
When first Mrs. Beesley asked me to release her husband from his engagement with me I was constrained to write and ask you not to employ him, but on consideration (I felt I could not be the same with him as I had been hitherto, and would rather be without his services) it seemed not right & I hope will never show such a spirit as to prevent any man from earning a living. I have no wish to lower him in your estimation but in justice to myself I feel I am not taking a liberty, for I think you ought to know how he stands with me. About this time two years ago you will remember you had an extraordinary amount of work on hand, I had as much as I could do from you at that time.
A few days after you called at my workshop Titchfield St. I heard Beesley had engaged to work for Mr. Holland, so after your kindness in saying you would not take a man from me I thought it my duty to see him as I knew you would not like any of your old hands to leave at that time.

I soon found out his reason for doing so, he being hard up Mr. Holland had promised to advance him some money. I think he said there was a judgement summons out against him. I advised him to see you and explain it, he had not the courage to do so, I then asked him how much it would take to get himself out of his difficulties he said about £10. I said I would lend it to him if he went & asked Mr. Holland to cancel the engagement. He was to repay me 10/- a week he paid a few weeks & I saw no more of him till one night last Oct. he was waiting for me as I left work he was in a terrible state, he asked if I would give him work at £2 a week. Knowing he was receiving £2.10.0 at Holland’s I knew it was very unlikely he would be content with the smaller sum for long, and as I wish to pay a fair price for labour I said I would give him 45/- and 5/- a week extra if he kept steady.
He was at this time literally speaking without shoes or clothes. I took him and clothed him throughout, altogether I laid out £8.10.0 that night.

This being in Oct. I need not tell you Sir work was on the wane, so it was with the idea of his making it up in the season I took him, he kept first-rate time for the first 3 months then lapsed into his usual state.
I have told you as near as I can by letter if there is any thing you do not understand I will be pleased to wait on you at any time, but my object in writing you is knowing your desire to see justice done that you will use you influence and power in this instance is the earnest wish of

Your obt. Servt. [obedient servant]
John Robertson
The exact amount due is £18.7.3

For readers interested, please see our re-print of Robertson's actual letter, his own handwriting, published alongside thsi article in the VGJ.

John Robertson is most commonly associated with Boss & Co., but he had worked as a stocker for Purdey from 1869 until 1873, before establishing himself as an independent gunmaker to the trade. By the date of this letter he was supplying many of the established London names from his workshops at 101 Great Titchfield Street. Curiously, the Lancashire Court address is not one associated with Robertson, and Donald Dallas found no mention of Purdey or Beesley in his surviving workbooks from this period. As such, there is a possibility that the relationship between Robertson and Purdey needs to be re-examined.

Robertson’s letter is tantalising, as it provides several clues to the identity of Beesley, none of which are definitive on its own. At the time of writing, Robertson had provided financial assistance and employment to Beesley, and has also recently released Beesley from his employment at the request of Mrs. Beesley. He also suggests that the Beesley in question had previously worked for Holland’s as well. It is generally agreed that Frederick worked for Purdey consistently between 1869 and 1878, only leaving to set up his own business, and had no previous relationship with Harris Holland. Edward, however, had been apprenticed to Holland, and also appears to have been moving around the trade during this period. As such, the suggestion is that this letter is discussing Edward’s behaviour.

The date of the letter can be connected to wages paid by Purdey to ‘Beesley’ between 14 June 1879 and 12 June 1880. The letter was written six days after the first payment, and makes sense of some of the writers opening comments. The amount being paid is about the same as the figures mentioned in the letter as well - £2 10s per week – about half what Frederick was earning prior to his leaving Purdey in 1878. Frustratingly, no initial is given in the wage book – as there was only one Beesley in the factory at that time, there was no need to make such a distinction. In total, he received £128 3s 10d for a year of work. There is once again no note in the wage book that he was dismissed, leaving Edward’s fate open-ended. 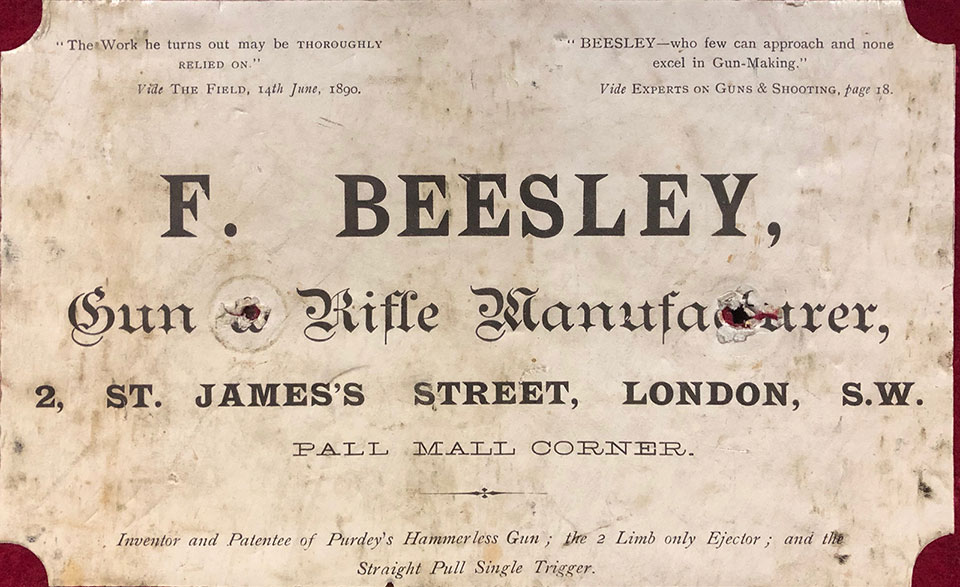 Juch’s article contains one detail that can be connected to those in the letter. Edward was recorded in The Commercial Gazette as facing a County Court Judgement for the sum of £22 9s 5d, issued on 27 April 1880. His given address was 314½ Oxford Street, which was Purdey’s premises, but it is not clear if this was his place of work or his residence. When Edward next appeared in the Gazette in July 1880, his address was ‘8 Merton Terrace, Greenside Rd, Goldhawk Rd,’ near Shepherd’s Bush, where he remained until at least 1882.

Perhaps the most interesting point about the letter is Robertson’s opening comment that it had been Mrs. Beesley who had asked for her husband to be released from his employment. Juch’s article suggests that, by the time of the 1881 Census, Edward and his wife were living separately, but their entries could not be found. In the 1891 census, Edward appears to have become Albert E. Beesley, a gunmaker lodging at 20/22 Barnsbury Street, Islington. He also appears to have gotten far less ‘steady’, as between October 1890 and December 1898 Edward Beesley was admitted to the Islington Workhouse on Cornwallis Road on at least sixteen occasions. His longest stay was nearly two months, but the majority were for a matter of days at most and, on most occasions, he was discharged at his own request. After December 1898 no further details of Edward’s life, or death, have yet been found.

From the information contained within Purdey’s archives, together with those available from public records, it would appear that Edward fell victim to at least one of the vices that worried Victorian society. Although some of the details of his family life cannot be confirmed, it does appear that he was far less successful than Frederick in many senses. It is unfortunate that this misunderstanding has tarnished Frederick’s character and reputation, but he can now finally be separated from the behaviour of his dissolute elder sibling.

Dr Nicholas Harlow is Gunroom Manager at Purdey, in London. 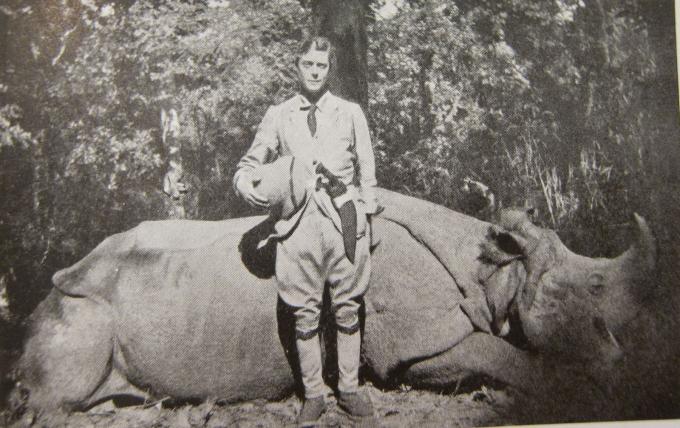 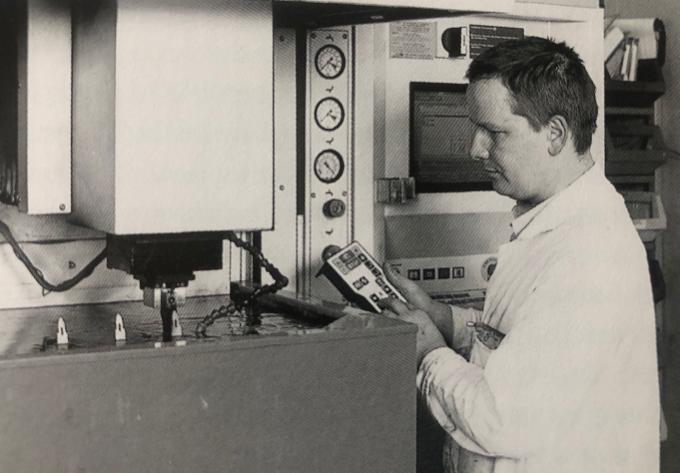 Interview with the Gunmaker No.9, with the UK's original component maker to the gun trade. 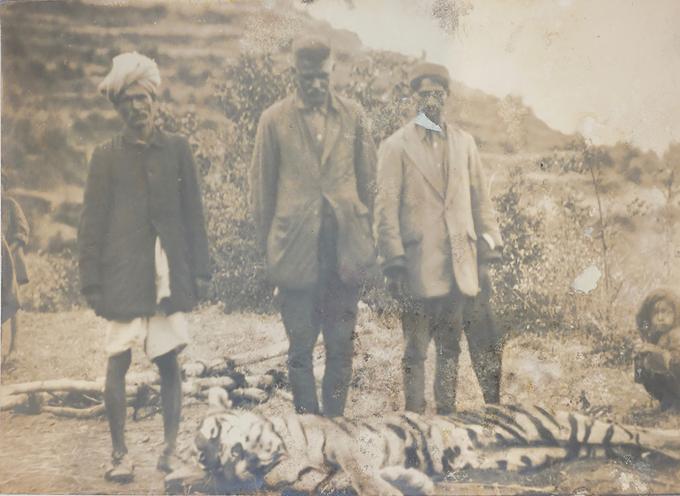 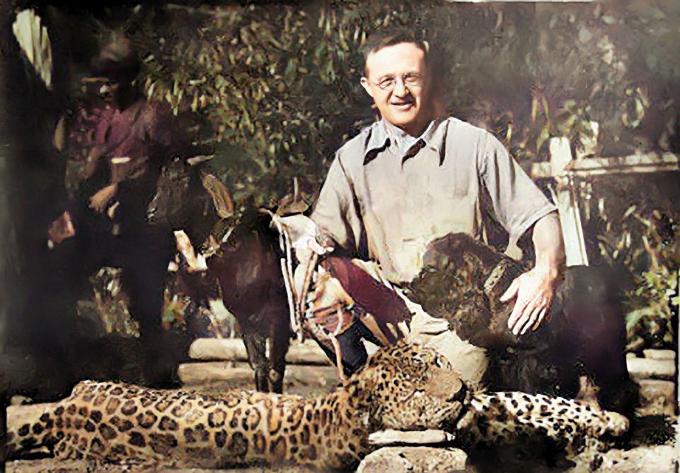