Shooting in the British Side-by-Side Championship half a decade ago, I found myself discussing a hefty 20-bore boxlock being used with great success by the eventual winner of that trophy. He wanted me to tell him something about his gun and so I talked him through it and took the barrels off to check the proof marks. The bore size equated to 16-bore, yet the chambers were stamped 20-bore.  What could be the reason?

Chamber sleeved guns are heavy for calibre, making them better suited to modern loads and steadier for shooting clay competitions.
Users of modern guns will be familiar with ‘over-bored’ barrels. It has become something of a fad in some circles. The modern application of over-boring began in the USA in pigeon shooting circles and has gained wider acceptance in trap shooting clubs and among  wild-fowlers elsewhere.

Browning now bore some of their competition guns at 18.7mm rather than 18.3mm, which wold be standard boring. Beretta apply larger than average bores in their new DT11 and the ‘Optibore’ concept involves a longer forcing cone and a larger bore.The advantages touted for having a larger bore include less felt recoil and better patterns. Clearly, the super-fussy competitors in the money or medal hunt appreciate there could be something in it.

New, as the concept may appear, it is not. Victorian ‘chamberless’ guns were made for brass walled cartridges and had chambers which opened almost directly into the true bore.   I have seen heavy wildfowling guns of this type in 12-bore with original bores measuring a whopping .775 at the measuring point, 9” from the breech. Note that nominal 12-bore is a mere .729, so the difference is certainly significant.

Bore diameter experiments in both directions have been applied in the past. The other extreme being the ‘Vena Contracta’; essentially a 12-bore chamber with a 20-bore tube, designed to fire conventional 12-bore cartridges. It sounds implausible but it was done and it does work; not that it was a great commercial success. I actually have one of these oddities, so I speak from experience.

The bore diameter of 16.0 is commensurate with a 20-bore, but the chamber stamp shows 28-bore. The chambers have been lined.
So, why are we discussing the merits of over-bored guns in the Classic Guns section of the magazine? Well, it comes down to a little discussed matter of customisation, which has found a good deal of favour in the United States but is far less often applied on these shores. The practice is known as ‘chamber-sleeving’.

Essentially, one begins with, say, a 16-bore; and reams out the chambers. Then a steel lining can be fitted to the enlarged chamber area. Conventionally, this can be done in the original gauge to renew pitted chambers but in this case, instead of fitting new 16-bore chambers, one fits 20-bore chambers. This produces an over-bored 20-bore with a bit more weight than the typical Victorian gun of that type, which makes it easier to shoot. It is no co-incidence that many a side-by-side small gauge championship has been won with a chamber sleeved gun. They just work better.

Cartridge choice is quite important. While I have had good results with chamber sleeved guns using fibre wad cartridges, the use of plastic cup-wads totally eliminates any chance of wad-tipping and gas escape, with the ensuing drop-off in pellet energy down range. Experiments at the pattern plate show very even distribution in the guns I have patterned myself and reports from the US, where veteran dealer and respected author Cyril Adams has been chamber sleeving guns for almost two decades, confirm the impression that the system is practical.

Another chamber lined gun – Here the 17.0 re-proof figure for bore size would indicate a nominal 16-bore but the chamber stamp shows 20-bore.

As I write, I have two chamber sleeved guns in my gun-room. One, originally a light 16-bore hammer gun, is now a 20-bore. The other, a light 20-bore hammer gun is now a 28-bore. It helps that Victorian guns were often made with bores tight for gauge (one often finds 12-bores with chambers that are actually 14-bore for example). Both perform very well and are beautifully smooth and recoil free to shoot. With this year’s British Side-by-Side Championship sponsored by Guns on Pegs at Sporting Targets in Bedfordshire on June 29th, I’ll be trying my luck with both. The guns will perform; whether the ‘nut behind the butt’ proves to be the weak point in the plan remains to be seen.

Exactly what can you put in your gun? 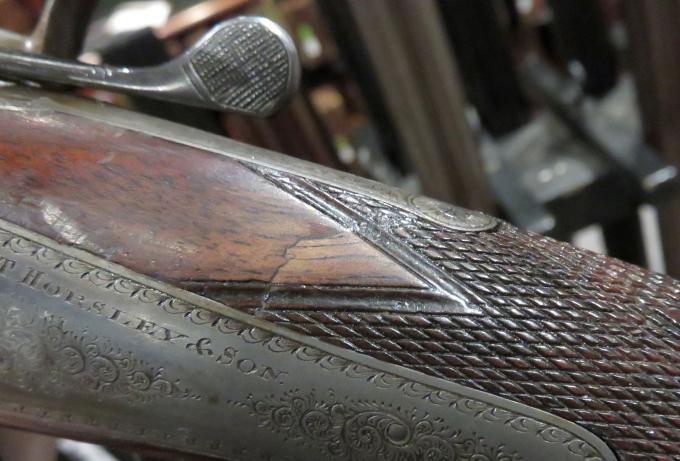 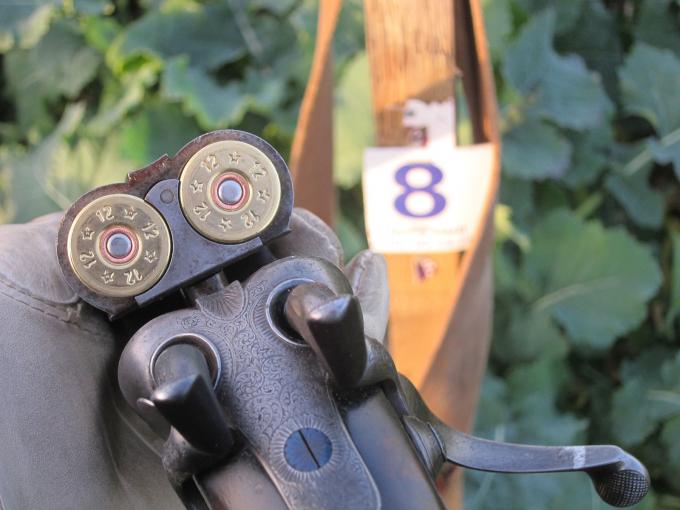