If I say to you, James MacNaughton of Edinburgh, what comes to mind? Easy - the classic MacNaughton round action of 1879, the original round action Edinburgh gun that was copied by John Dickson & Son one year later in 1880. Or you might think about the MacNaughton skeleton stock (bar-in-wood) that gives his hammerless guns such an elegant and unique look.

This combination of round action and skeleton stock created a very handsome gun, light, strong and very graceful so much so that it is still built today by John Dickson & Son. What certainly does not come to mind when you mention MacNaughton is a whopping great single barrel 4 bore with 48” barrel weighing 16lbs. 6oz, way more than twice the weight of two round actions.

And yet this is what James MacNaughton built in the year 1880, a hammerless falling block 4 bore to his own patent. Unfortunately the surviving MacNaughton records are very poor and this cannon, no. 759 has no mention at all in the records. It is a great shame as I would have loved to have known who on earth would have ordered a gun like this. I have a hankering suspicion that it might have been built as a demonstration gun, the ultimate expression of his newly introduced 1879 patent. Hung up on the wall of his shop, this monster would certainly have been a major talking point for his customers.

Hung up on the wall of his shop, this monster would certainly have been a major talking point for his customers.

James MacNaughton was born in Edinburgh in 1838, the son of a shoemaker. At the age of 14 in 1852 he was apprenticed to John Dickson & Son at 63 Princes Street. Upon the completion of his apprenticeship he remained with Dickson for five years and then set himself up in business in 1864 at 33 George Street remaining at this address until 1869. In 1869 he moved to 26 Hanover Street the address that is always associated with James MacNaughton in the 19th century. This gun bears the famous Hanover Street address. 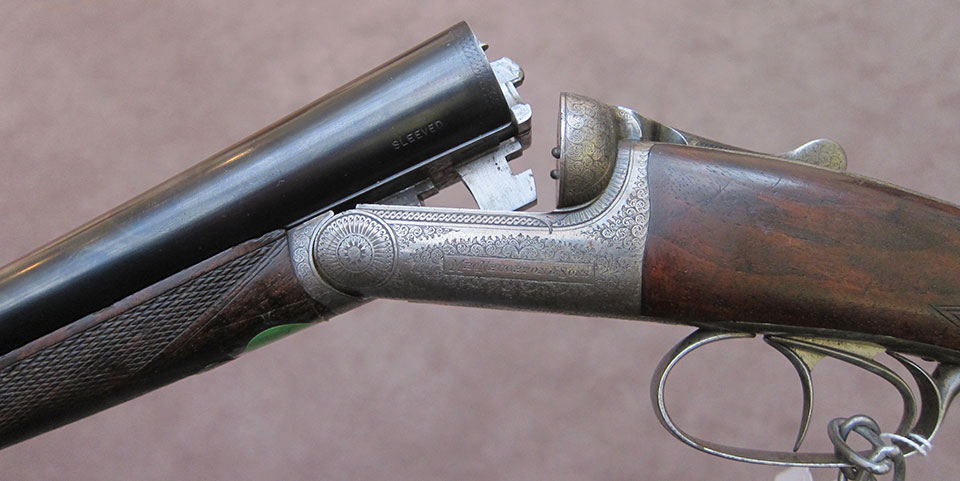 On the 12th July 1879 James MacNaughton took out patent no. 2848 that created one of the most famous actions of the 19th century, the MacNaughton round action trigger plate. It was copied by John Dickson in 1880 and between them, the world famous Scottish round action was born, still in production today. 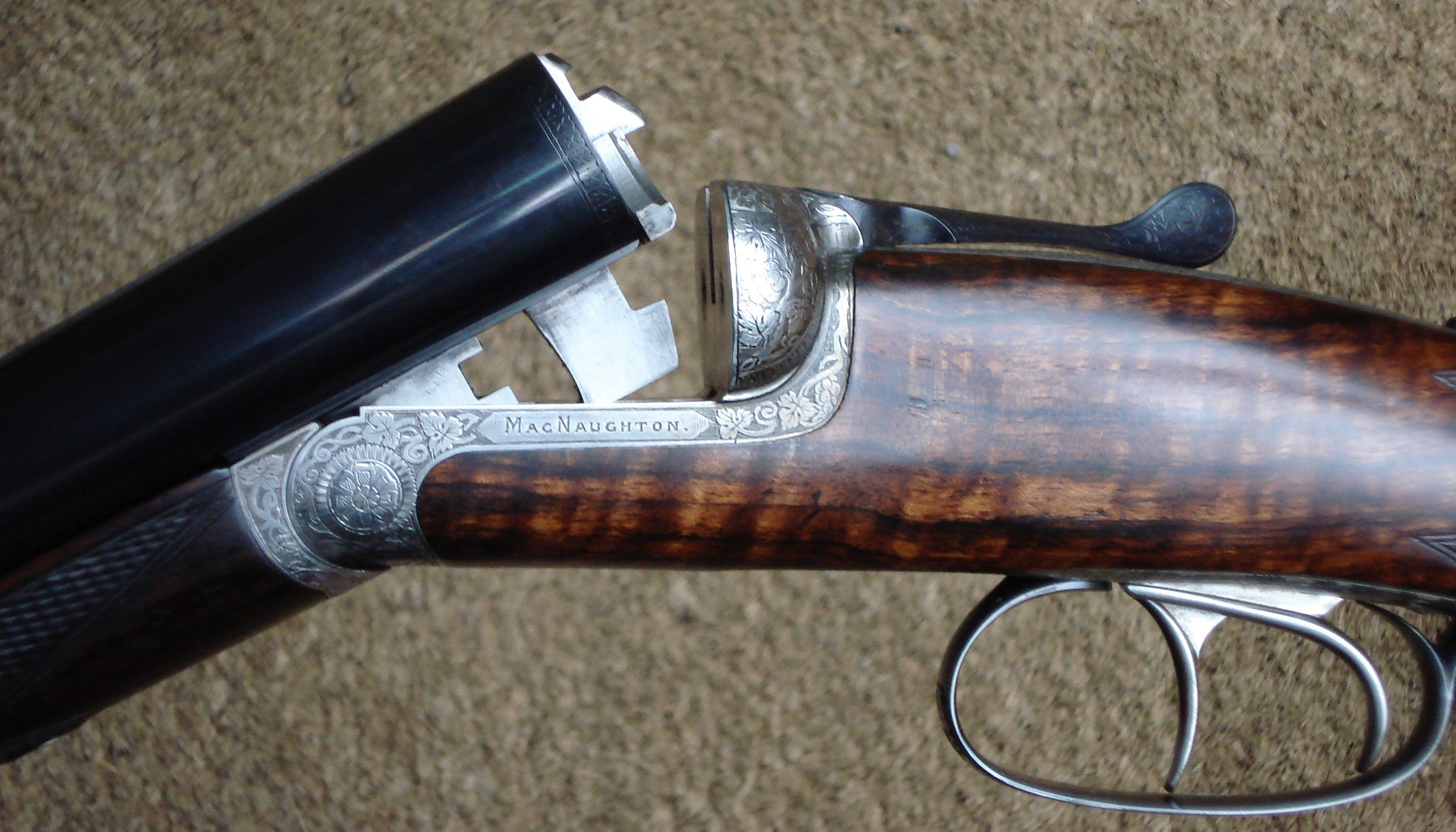 Patents were very expensive to take out and keep in force for their full 14 years hence gunmakers often included several designs in one patent. This is the case with the MacNaughton patent; it wasn’t just a trigger plate, it comprised extractors, sear springs, safety catches, crystal indicator ports and a falling block action.

It is this falling block action that is used in the MacNaughton 4 bore. A lever under the trigger guard was pushed forwards to lower the breech block and cock the hammer. It was applicable to rifles and shotguns and I rather think that to publicise it, MacNaughton built this spectacular 4 bore. 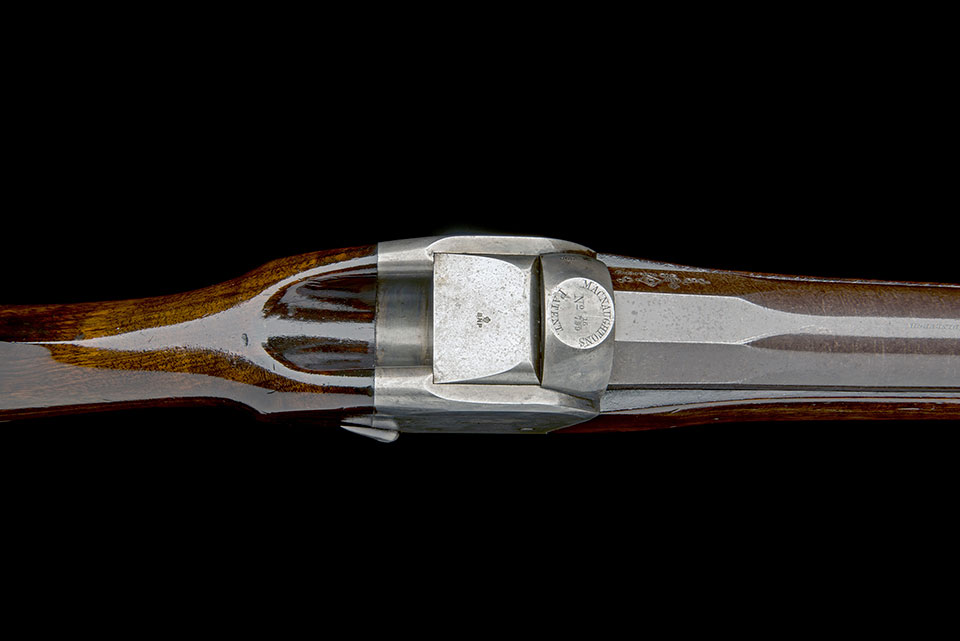 The gun itself is numbered 759 and it bears the patent use number 16. Consequently although no record exists of the gun, it is an early example of the patent design and can be dated to 1880. The barrel is an enormous 48” in length and yet it is of very fine quality damascus. It is engraved “James MacNaughton, 26 Hanover Street, Edinburgh”. The chamber length is four inches. On the top of the breech is engraved “MacNaughton Patent No16/759”, the 16th gun built to the 1879 patent. On both sides of the action “The Edinburgh” is engraved. James MacNaughton gave his round action gun the name The Edinburgh and this will be found engraved upon the breeches of these, but this is the first time I have seen a completely different type of MacNaughton gun engraved as such.

The stock is devoid of checkering and yet is finely figured with a rubber recoil pad. The gun is in excellent original condition with much colour hardening showing little signs of use. It is an absolute monster of a gun and weighs 16lbs. 6oz.

It is an absolute monster of a gun and weighs 16lbs. 6oz. 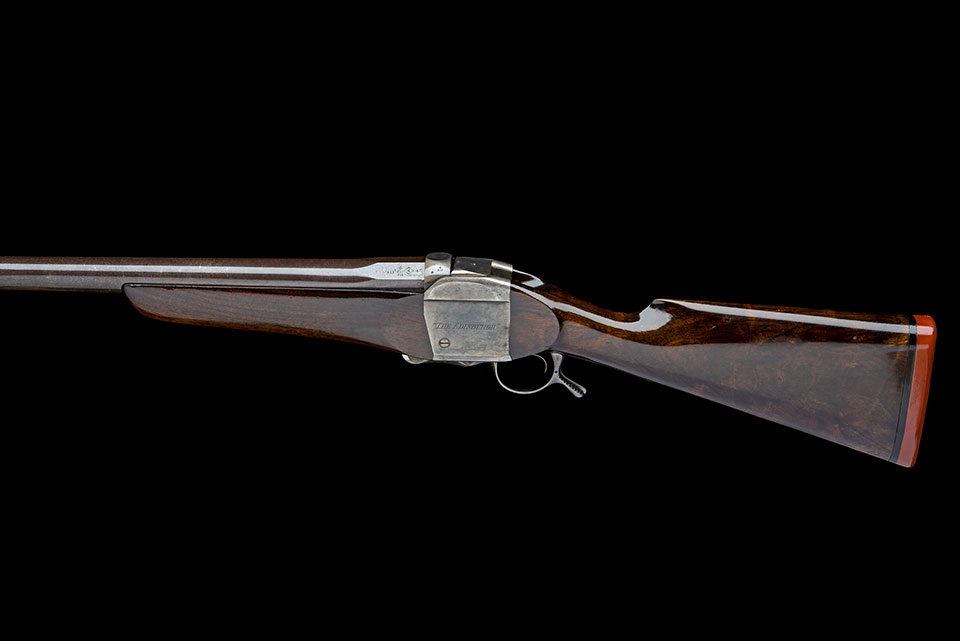 MacNaughton’s 1879 Patent
On the 12th July 1879 James MacNaughton took out patent no. 2848, an all encompassing patent the most important part of which concerned his trigger plate round action.

But one of the other parts of the patent showed a falling block design. In 1865 Alexander Henry of Edinburgh had taken out a patent for a falling block rifle that soon became the envy of gunmakers, Henry selling many hundreds of examples.

...as part of his 1879 patent he invented his own falling block.

Many other gunmakers attempted to emulate Henry’s success and brought out their own versions of the falling block. James MacNaughton was no exception and as part of his 1879 patent he invented his own falling block. A lever under the trigger guard was pushed forwards. A link attached to it lowered the breech block and at the same time the hammer was cocked. A cartridge could then be inserted, the lever pushed back and the breech rose to create a totally secure bolt. On the right side a cocking indicator was present very similar to the Martini-Henry indicator.

MacNaughton was primarily a maker of sporting guns and if customers wanted a rifle it was to Alexander Henry that they visited. On account of this MacNaughton falling blocks are quite rare as he was not known as a builder of rifles. The patent specified that the falling block could apply to either shotguns or rifles but a single shot shotgun was of limited use unless of course it happened to be a 4 bore.

MacNaughton’s Skeleton Action
The term skeleton action is not used in England, bar-in-wood being the preferred description. It is a uniquely Scottish expression and refers to the design of some guns both hammer and hammerless made by James MacNaughton and to a lesser extent John Dickson.

The bar-in-wood design is frequently encountered particularly on hammer guns by James Purdey. They were a continuation of muzzle-loading practice as in a bar-in-wood gun the woodwork continued right up to the fore-end with the action enclosed by wood, (The bar was in the wood) A very beautiful design was achieved and bar-in-wood hammer guns are the most elegant of all. 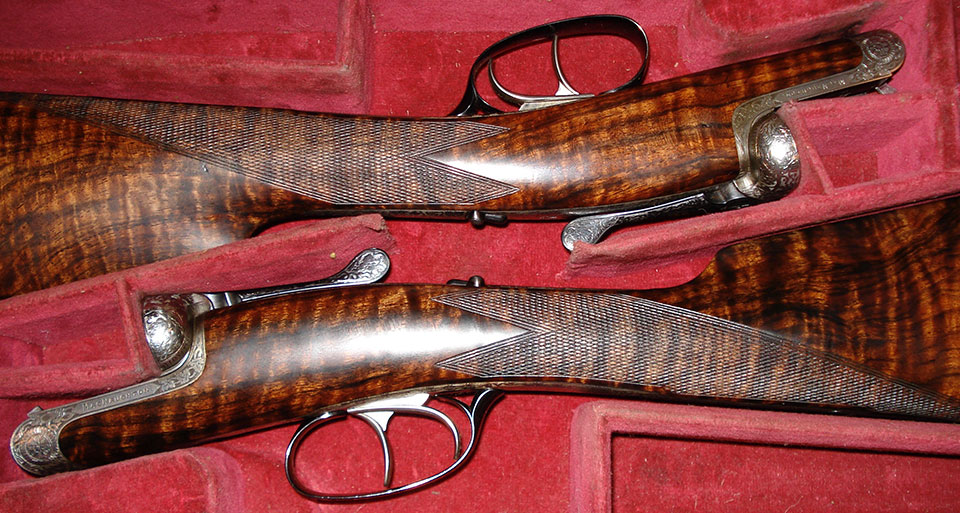 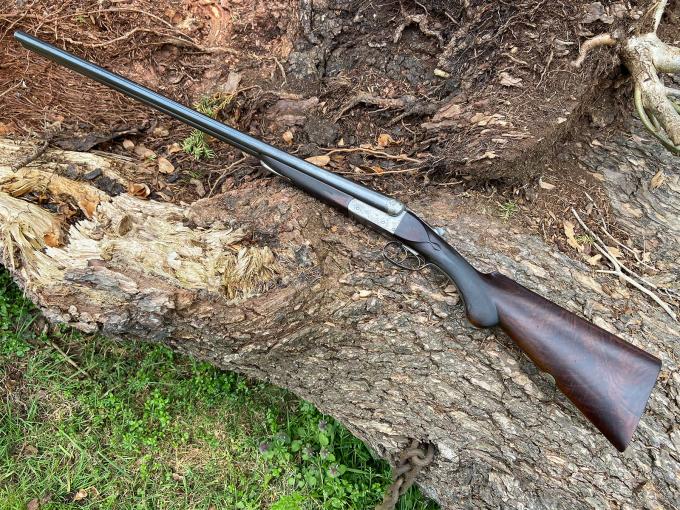 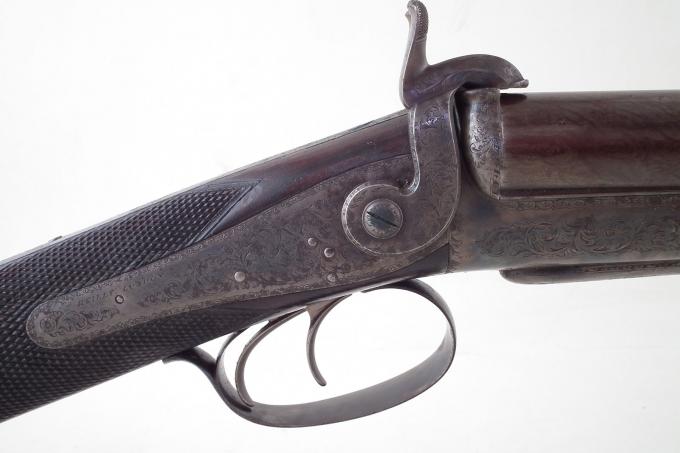