An important factor pressing on the British gun trade in the closing decade of the 19th Century and the opening one of the 20th was the rising cost of labour and the increasing mechanisation of other industries. Over & under guns (as we shall see) may have been perfected by WW1 but they were even more expensive and complex than best side-by-sides and did not offer much inspiration to manufacturers supplying the lower end of the gun market.

Sporting gunmaking in all its forms had been an odd mixture of industry, craft and artistry for it’s entire history, and the reliance of skilled men at every stage of production was becoming onerous in an age when there was huge demand for mass produced items of sound quality and low price in markets throughout the world. The old British gun trade would have to adapt or die; its best years were behind it by 1910 and a number of Birmingham firms attempted to mechanise production of the shotgun in the way that was applied to service rifles.

Until then, no two shotguns made were identical, though Bonehill had attempted to tackle this with the ‘Interchangeable’ boxlock in the 1880s. Each one was made individually and no two guns of outwardly similar appearance could exchange parts. Interchangeability of common parts was to become a requirement, as was production-line manufacture, otherwise all but those firms able to prosper on a small number of bespoke guns per year were doomed to fail.

The firm of BSA were well used to producing weapons on production lines; they made plenty of machine guns and rifles for the armed services on them. With the increased demand for shotguns of utility grade that were sound and reliable, the company began producing double barrelled hammerless non-ejector guns in the 1920s. Ejector models were available for a little more money.

The action was the typical Anson & Deeley type and the gun conventional and plain in most respects. An innovation that distinguishes the BSA is the method by which the steel barrels are constructed. Barrel tubes were formed with integral lumps but the two were then dovetailed together. This increased the width of the breech ends of the barrels. As a low-priced gun, BSA clearly made extra effort of emphasise the strength of the construction and the high quality of the materials used. The effect was a plain, serviceable and safe gun that could be bought and used with confidence for the sum of only £11.50 in 1923. BSA chose well-proven mechanisms for each working part and conventional proportions for wide acceptability. The Anson push-rod is used in the fore-end, the stock had a 14 ¼” length of pull, barrels could be chosen from 28” or 30” options and chokes were set at Improved Cylinder and Full Choke.

The use of machinery instead of hand labour, rather than lowering the quality of materials or workmanship, was the reason for the low price. Burrard attested to the strength of the action and the superiority of the BSA over similarly priced ‘budget’ guns from Belgium, where both quality of materials and workmanship were comparatively poor.

BSA offered a number of variants of the gun – ‘Standard’ and ‘de-Luxe’ versions with 2½” chambers and a wildfowling version with 2¾” or 3”chambers.

The BSA was not the only attempt at meeting the challenges of cheap overseas imports. Ward and Sons of Birmingham produced their ‘Target Hammerless Gun’, which was patented in 1918 and offered for sale in the early-mid 1920s. The gun is very plain, retailed for around £11.00 and although appearing to be a conventional Anson & Deeley action, employed coil, rather than leaf, springs. It has distinctive conical fences of the ‘Leeson’ type and was clearly aimed at the same market as the BSA. By the end of the 1930s the Target Gun had vanished.

Webley & Scott, the merger between the old firms of P. Webley and W & C Scott maintained a presence in the market longer than most. They offered ‘best’ sidelocks but the mainstay of their production was the Anson & Deeley type action, which became known as their ‘Proprietary’ hammerless model from 1900. This continued, spawning a number of variants including; the Model 400 (1900-1946) fitted with a Webley Screw-Grip, Model 300 (1922-1939) with a Greener Cross-bolt, Model 500 (1925-1946) fitted with the Webley Screw-Grip, Model 600 (1927-1946) only as a non-ejector and Model 700 (1947-1979), including the more highly finished 701 and 702 versions. All featured top-lever operation, Purdey under-bolt locking via a Scott spindle and Anson push-rod type forends.

These guns were made in a variety of grades and weights and single and double triggers variously offered. They were designed to enable parts to be machine-made as far as possible, with dimensions being machined close to the tolerances required, before hand-finishing was applied as the final stage. This enabled production time to be reduced and output to increase. The final model, the 700 series, was produced in large numbers but prices rose through the 1970s and with foreign competition taking an increasing toll, production ceased in 1979; and with it the last real gunmaking factory in England, producing decent quality guns at prices the average shooting man could afford, closed its doors.

History has shown that the bulk of the Birmingham trade did indeed shrivel and die as a consequence of two world wars and the decline of Empire. Actually, WW2 was something of a coup- de-grace;, WW1 had already inflicted fatal wounds. While some top British firms have survived into the 21st Century producing relatively few ‘best’ guns for wealthy customers each year, the Birmingham boxlock has been replaced by the Italian, Belgian or Japanese over & under as the workhorse of the shooting community and the Spanish (and to a lesser extent the Italians) have dominated the side-by-side market in the ‘affordable’ bracket since the 1980s. In the 21st Century even Turkish firms like Yildiz are forging a market share in the ‘budget’ sector.

However, the demise of the gun trade in Britain after World War One did not herald the end of invention or a period of stagnation in the development of the shotgun. The era of supremacy the British had enjoyed for around sixty years had come to a close and their legacy was the perfection of the hand-made breech-loading shotgun of side-by-side or over-&-under form. Others would step in to meet the changing needs of the new Century. 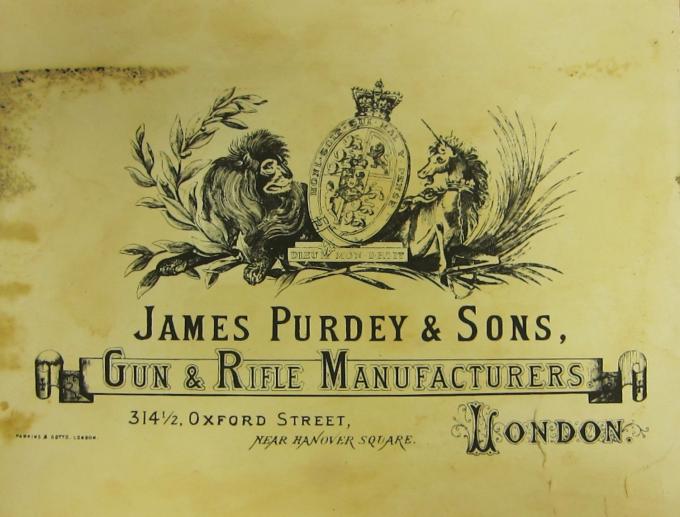 Guns of the 1870s are hard to beat for quality and beauty.

Rigby has returned to its past to gather inspiration for the latest shotgun project.