And we do something in the shooting line at Kabob; though the small game is scarcely worth the exertion of tramping after, being at rather an inconvenient distance. We can, of course, go out and knock over our dozen or two brace of blacks (partridges I mean, not niggers), and snipe; as many as we choose to blaze away at, to say nothing of hares and all sorts of small fry, when in season; yet who cares for such cock-robin sort of shooting after having been accustomed to polishing off a tiger or two before breakfast, and bagging a few leopards, bears, and such-like before tiffin ?

You would like to try your luck at tiger-shooting? Of course you would: what English schoolboy with a soul for a popgun would not! There is the experienced Byle, with a pericranium like a walnut, which the sun can't crack, who will give you a lesson, and under his tutelage I engage you will be shown some sport. Of course, you will be exposed to the sun, and perhaps to the water too.

Think of Byle: the other day, in his little encounter with a tiger, on his last expedition; the elephant upon which he was riding, feeling the claws of the tiger rather unpleasantly intrusive on his hind quarters— just as you might disapprove of the claws of a great tom-cat penetrating your own thigh— ignominiously took to flight, rushed past the edge of a tank full of water, under a tree, a bough of which caught the howdah, which, from the impetus at which the elephant was doing his back-steps, was swept off, dropping Byle into the water, which, fortunately, was only five feet deep.

The tiger also lost his place by this sweeping measure, and fell on the bank; there he stood, being about as fond of water as a cat, and being pretty sure of his prey; while Byle, with his head only out of the tank, as you see a buffalo in a river, stood staring at him in turn; and thus they remained for hours under a broiling sun till a party came to the rescue—Byle reached the other side, got a gun, went back into a good position, and then and there, while swimming, lodged a rifle-ball in the tiger's
head.

Now, you may have a chance to-day of doing the same; for this morning an aggrieved agriculturist came howling into the cantonments, reporting the sudden apparition of a tiger, only fifteen miles off, which had abstracted his oxen and his fatlings, and evinced a desire, moreover, to elope with his wife. So Byle has got his battery—not the Cow Battery, but his private battery of guns—fieldpieces you may call them if you like, or, at any rate, fowling-pieces and rifles. Topey has lent some elephants, a troop of beaters have been enlisted, and we shall be off in the morning by daybreak. The elephants go out to-night, and we go to cover on our hacks.

Byle frequently faces his tigers on foot; but I don’t recommend you to do that, unless you can guarantee your nerves not flinching in a time of imminent danger; and let me tell you the nervous system is not at all unlikely to suffer temporary derange-ment at being made a Van Amburgh without any preliminary preparation, and placed suddenly in the immediate presence of a “ Royal Bengal " without the interposition of the menagerie railings.

But the morning gun has fired; our valet has roused us from our hard cot and our soft slumbers; we have quaffed our Bohea, mounted our Arabs, and galloped to the scene of action. The elephants are all prepared, with their sporting howdahs duly stocked with their batteries. The afflicted agriculturist is there, and points out with looks of anguish on the vestiges of (the tiger's) creation," in the shape of the bones of his favoured bullock which the famished tiger then and there devoured, as we see some watery-mouthed schoolboy devouring at the pastrycook's door the tartlets he had thought to carry home, but which hunger and a wistful eye could not resist. We listen to his tale of woe, hear that two more bullocks have been abstracted, and we promise the full value of all, and of many more, if he null but show us the tiger. 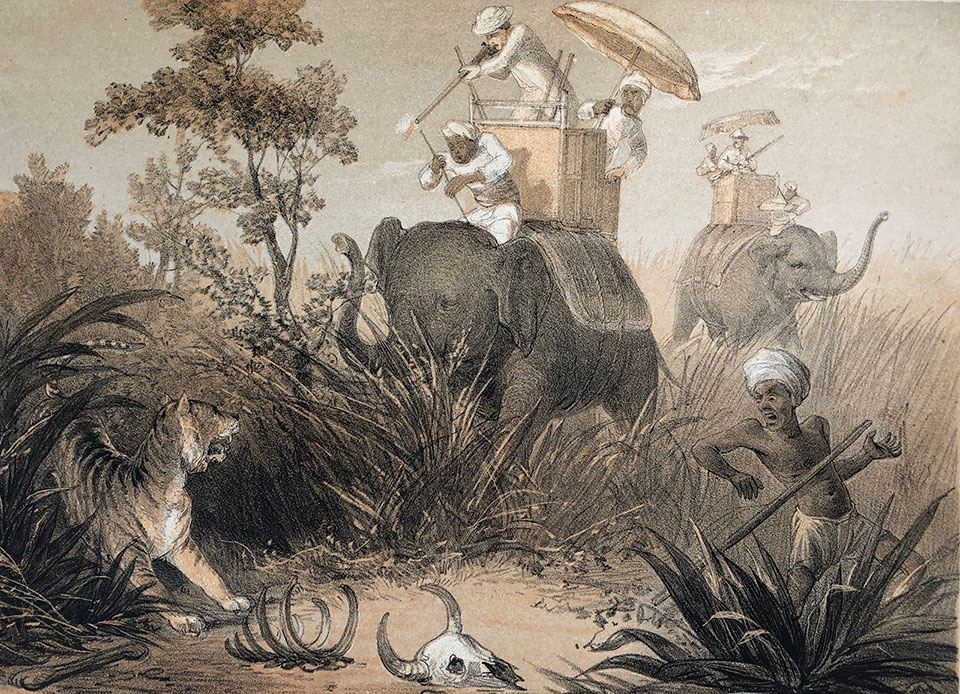 Away then we start. With cunning eye the beaters track the foot-prints in the shade. He has got into the jungle, and now the track is lost; the beaters form in line. Byle leads in the centre, while Dbalbhat and Muggins are on the left, Huldey and Godower on the right, and a few more. Away we go; we strain our eyes in every direction ; occasionally we have a false alarm, then the elephants turn up their trunks, and go trumpeting along, crushing down the jungle—at times into the deep ravines, into which they lower their huge bodies so carefully and so well, then clambering up again, press onward on their way. A beater gives a shout—he is on the track—he sees blood upon the trampled grass. The sun has begun to beat down its penetrating rays upon our turbaned heads, which need the still greater protection of the umbrella. Another shout! Byle, with a practical eye, judges where the game may be, points to our friend the agriculturist, who is beside his elephant, where he should explore. A yell, accompanied by a precipitate flight on the part of the bereaved Oriental, followed by a roar from the tiger, and two sharp cracks from a double rifle, announces to the field that the game has been found.

The bullets have struck the tiger, but not fatally; he crashes into the jungle before Byle can take up a second gun, and springs in his rage on to the tail of Dhalbhat's elephant, which, unaccustomed to such sports, being simply a baggage-elephant enlisted for the occasion, had wheeled about with inconceivable rapidity at the first roar of the tiger, and was preparing for an ignominious flight, when he was tackled from behind; but a ball from Dhalbhat drops the tiger from his hold, who then receives a third*broad-side from Huldey's gun. By this time the mahout of Byle's elephant has brought him round, and, with two more carefully-directed shots, Byle gives the tiger his quietus.
The victim is hoisted on to a pad elephant, we refresh ourselves with the necessary beverages, tramp back on our elephants to the rendezvous, mount our Arabs, and gallop back to cantonments in time for tiffin, delighted and properly baked in our morning's amusement, and long to hear of another tiger having ventured into the dangerous proximity of “ Our Station” .

Written by Capt. G.F. Atkinson, Bengal Engineers (from his book, Curry & Rice; The Ingredients of Social Life in 'Our' Station in India). The excerpt was taken from a copy belonging to my ancestor, Charles Oswald FitzGerald, inscribed 23/4/1872, when he was a captain in the 3rd cavalry. The book is a humourous reflection on the antics and attitudes of the inhabitants of the British community in exile and the language is of its time. 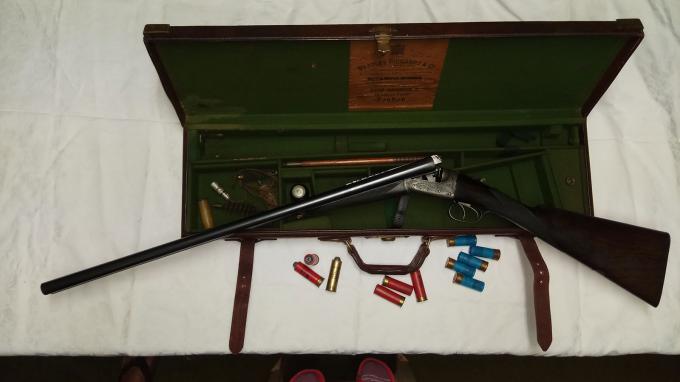 Stephen Barnes in the Outback 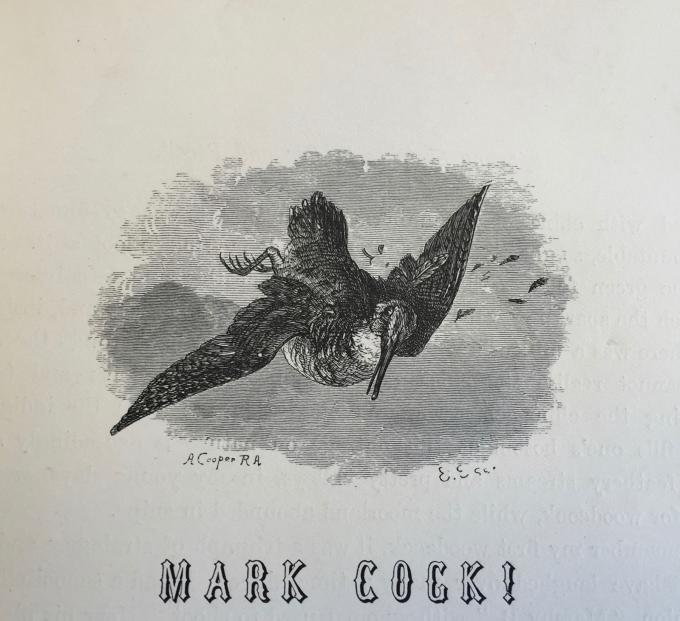 The elusive woodcock is an icon of our sport and should be engaged lightly. 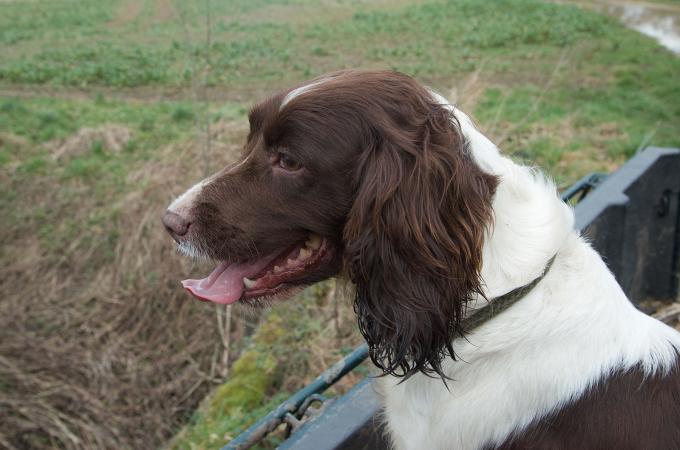 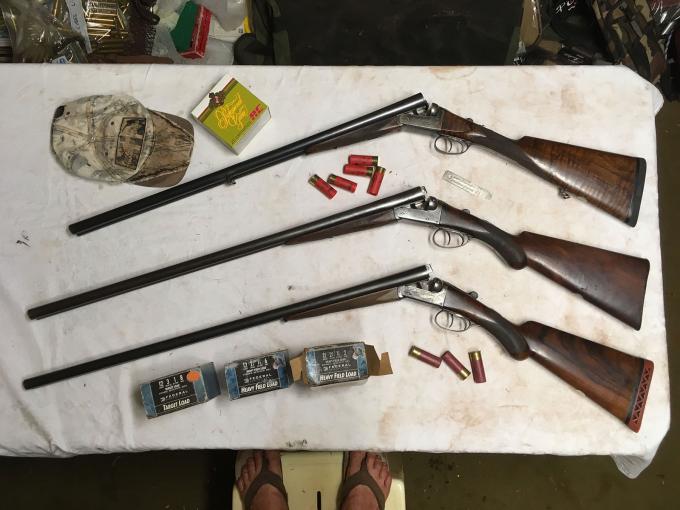